Skip to content
Review: Lady Day at Emerson’s Bar and Grill at the Garry Marshall Theatre

On May 15, 2019, Lady Day at Emerson’s Bar and Grill by Lanie Robertson opened at the Garry Marshall Theatre in Burbank. The stage was set to recreate the final gig of Billie Holiday at the Emerson Bar and Grill in Philadelphia. 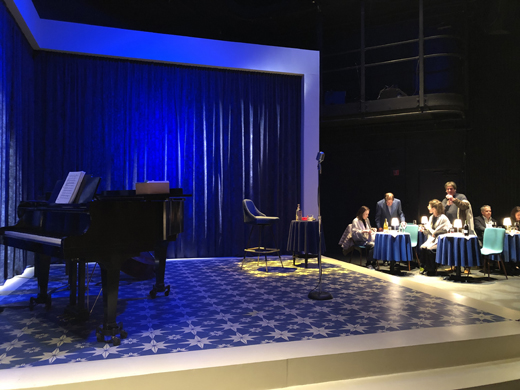 We were led through the backstage area, passing by posters of jazz greats from that era, and then arrived onstage. A piano and a 50s style microphone was the focal point, with tables and chairs on the sides of the stage. The red wine that we requested while checking in at the box office was waiting for us. There was also a full audience behind us. We sat in anticipation of what was to come – a wonderful night of music, but also a front row seat to the tragic life of Billie Holiday 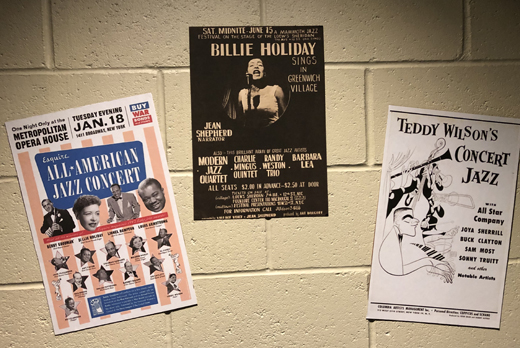 The piano player (musical director) and bass player took to the stage without Billie Holiday. Finally, after much coaching from Jimmy Powers (the piano player portrayed by Abdul Hamid Royal), she appeared. I was taken aback, this hunched over woman looked much older than her 44 years (the age Billie Holiday was when she died). This depiction of Holiday (by Deidre Henry) was jarring, but right on par. Whether it was a directorial or acting choice, this character lived a perilous life filled with hardship, and it showed.

She launched into a sultry rendition of “When a Women loves a Man.” Next came “What a Little Moonlight Can Do,” which would become the anchor of the show. It was as if she was searching for something that she would never find, akin to an addict attempting to achieve that very first feeling of being high. 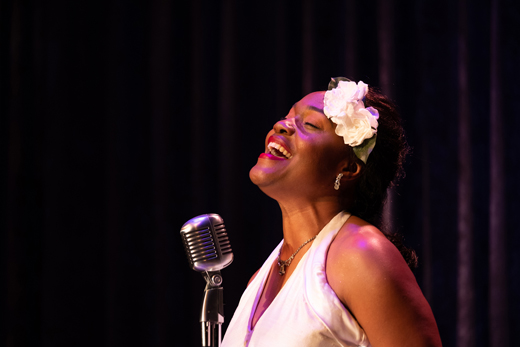 “Crazy in Love” seemed to foreshadow the lament of her first love Sonny…who her mother despised. She wrote “God Bless the Child” for her mother. Holiday always wanted her mother’s support for her and her first boyfriend. Sonny had left an indelible mark on her life…and the Duchess (as she often called her mother) warned her. But love took precedence and Holiday would ultimately do prison time in his place due to Sonny hiding his drugs in the singer’s luggage.

Henry’s portrayal of Lady Day (as Holiday was dubbed by her musical partner and saxophonist Lester Young) was riveting. She did not try to mimic Holiday’s voice, but instead offered us hints of Lady Day’s musicality…all the while staying true to her own voice, which was pure and emotional. Despite some reaction from the musicians, this was for all practical purposes a one-woman show. Henry owned the stage, demonstrating an addict’s behavior under the influence with all her demons stirring.

While Lanie Robertson’s script is filled with outrage – spotlighting many sad moments of Holiday’s life, humorous stories are interspersed between the venerable music that shot the singer to stardom. Holiday recounted the story of when her good friend Arty Shaw invited her to sing with an all-white band at a club. After eating in the kitchen (as the club insisted), she asked the manager where she could use the restroom. The manager (a female), who obviously was looking down at her, explained that the club was not set up for that. Yes, there was a colored men’s restroom for the employees, but there was no women’s restroom for colored people. After much frustration, Holiday laughed as she described how she just let loose and urinated on the floor much to the chagrin of the manager…who jumped back and left screaming out of the kitchen. 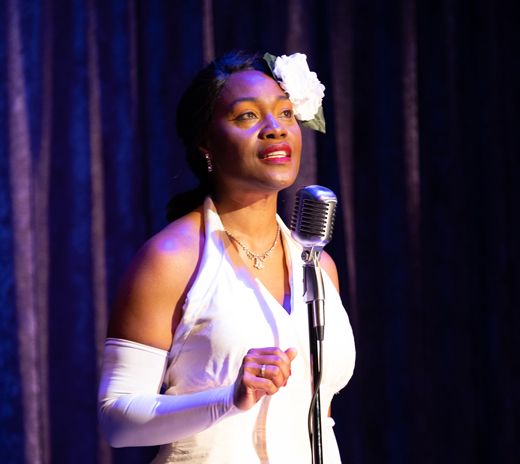 Henry’s depiction is both vulnerable, yet caustic…allowing the audience to see how Holiday’s past truly determined her life’s journey. Lady Day’s internal dialogue, which we the audience were invited to witness, was filled with angst and frustration about her position in life and the backward way the world related to her. As I sat there, steeped in my own white privilege, I was brought to tears, reminded and exasperated by what she went through. Robertson plays into the injustice bringing many poignant moments to the forefront all the while making a socioeconomic statement.

The show pays tribute to Holiday’s love of Bessie Smith with rousing renditions of “Gimme a Pigfoot and a Bottle of Beer,” and “Taint Nobody’s Biz-ness If I Do.” Holiday’s “moonlight” reference was revisited at the end of the show…exhibiting how important it was for her to find that sweet spot again with a little moonlight.

Just before her final song, she suddenly stood up straight. The lights softened her face as if to simulate an angel…her smile brightened. It was like she shed her drug habit and battered life, and she was young again and full of hope…one can imagine she was on her way to heaven. “Deep Song” (the closing song) was raw yet tender. 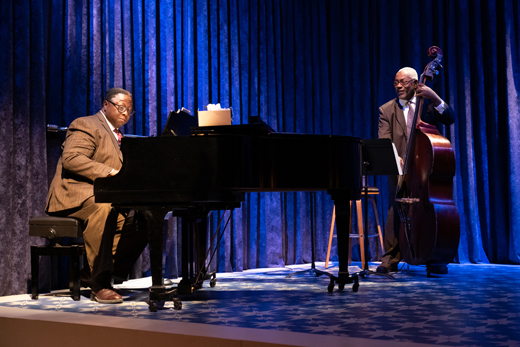 The production was eloquently directed by Gregg T. Daniel. Both the piano player played by Abdul Hamid Royal and bass player (James Leary) were perfectly suited for the roles adding to the piece while not stealing focus. Sound designer Robert Arturo Ramirez offered a perfect mix of vocals and music, and the lighting design was masterfully executed by Tom Ontiveros. Michèle Young provided lovely costumes of the day.

If you are a fan of Billie Holiday or want to learn more about the life of this legend, be sure to attend this production of Lady Day at the Emerson Bar at the Garry Marshall Theatre located at 4252 West Riverside Drive, Burbank CA 91505. Due to popular demand, the run has been extend to June 9, 2019. Performances take place Wednesday, Thursday, Friday, and Saturdays at 8pm; Sundays at 3pm. Reserve early if you want to order VIP tickets (on the stage) as they are limited. More info can be found on the website. http://www.garrymarshalltheatre.org