Skip to content
Review: King Lear at The Wallis

We take our seats in the Bram Goldsmith Theater as well as in bleachers constructed on the stage that is set with banquet tables. Pillars of video screens on either side of the stage project images of storms, forest fires, tidal ways, desolate landscapes. A soft female voice narrates some inaudible news-like report to background sounds of disquieting sonic humming.  As an actor sits pensively at the table and moves upstage, the play begins with the ominous voiceover “Ours is a perilous world.” And so, we have entered the set and setting of “King Lear” to experience what is certainly a very creative re-imaged production of Shakespeare’s classic tragedy. 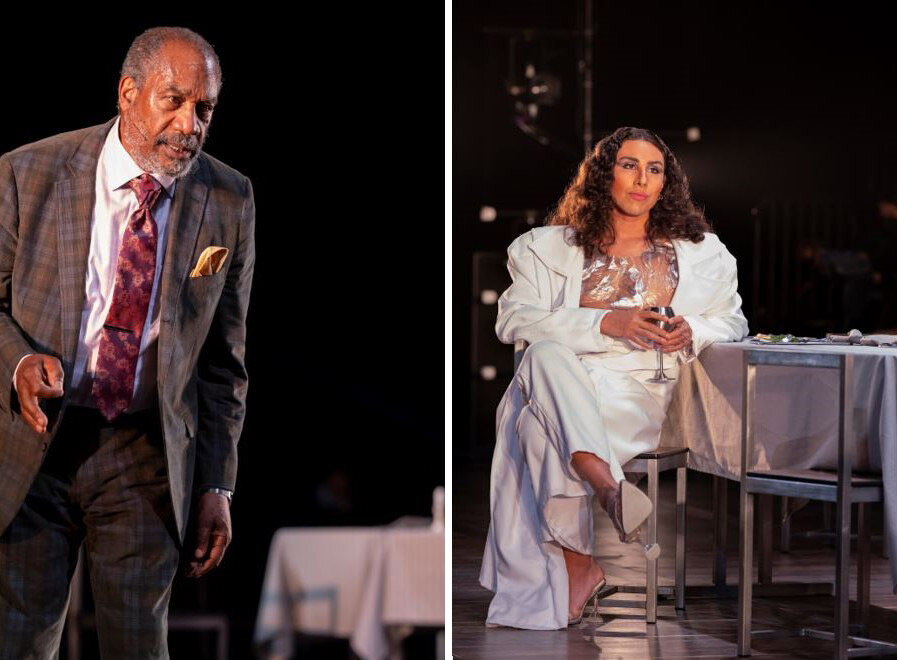 The story line, streamlined by removing some characters, exposes the violent power struggles within a dysfunctional extended family. Lear demands the love of his three daughters as he decides how to divide his kingdom amongst them and Lear’s loyal courtier Gloucester grapples with his two feuding sons,

Though it can at times be difficult to understand some of the archaic language, we are kept engaged during the two act 3-hour play by the expressively riveting performances of all the cast. Our attention is also held by the actor’s innovative use of cell phones to capture live video close-ups of each other as well as to project revealing text messages between characters. With this, the play also takes on a feel of us watching a faux documentary reality television show.

Joe Morton, as Lear, rants, raves, tantrums, grovels, and babbles as he struggles with his deep inner turmoil and descent from the once powerful patriarch, seeking to relieve himself of his responsibilities, to the madness of a man betrayed and defeated in spirit. River Gallo begins and ends the play portraying the banished Cordelia and is captivating throughout the play as they also take on the role of Fool who double-talks and sings frivolous songs to cajole and advise Lear. Rafael Jordan as the scheming Edmund, commands the stage offering powerful soliloquies and Zachary Solomon as Edgar, stripped down to a red tunic for much of the play, scampers about skillfully taking on the character’s various impersonations. Brie Eley is flirtatious yet ruthless as the jealous Regan and Emily Swallow portrays an aggressive and treacherous Goneril as she takes on Lear’s emotional and physical abuse. Mark Harelik rounds out the cast as the embodiment of the white-bearded loving, yet clueless and superstitious, Glouester. 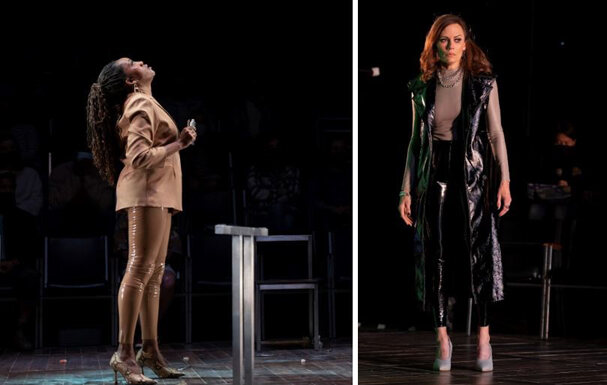 King Lear is directed by John Gould Rubin with Christopher Barreca’s stark scenic design allowing the focus to be on the actors, while Stephen’s lighting design and Music Composition/Sound Design by Danny Erdberg and Ursala Kwong-Brown reinforce and masterfully transition the emotional impact of the scenes.  The contemporary and near futuristic costume design by Deborah Hartwell reminds us of where and when we are, and the video projection by Keith Skretch makes this a unique and compelling production to experience.

Though the program “warns” of featuring strobe lighting effects, loud noises, theatrical fog/haze, and some graphic violence, I do not think these factors would inhibit any mature person from enjoying the play. 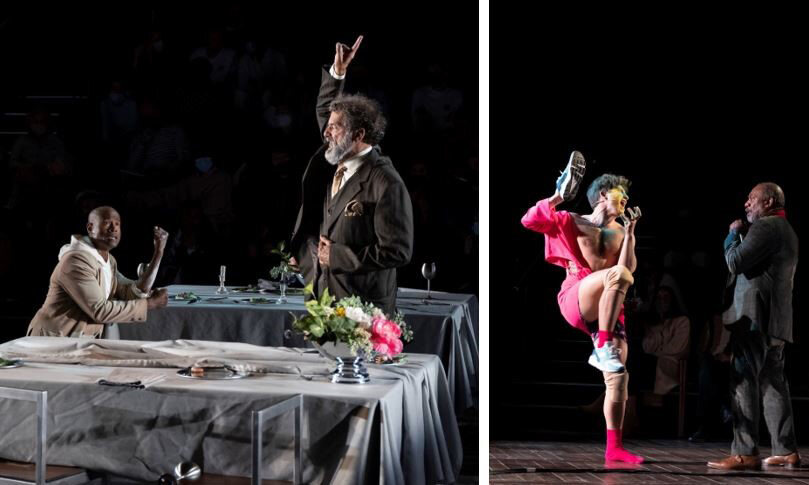 And as a side note, for those awaiting the next season of HBO’s “Succession” and the plight of the Roy family, you may want to experience this version of King Lear as an opportunity to gain some further insight or amusement in the parallel themes of the shows and add to your appreciation of the mythic archetypes depicted originally by Shakespeare.

“King Lear” runs through June 5 at The Wallis in Beverly Hills – http://thewallis.org