Art Los Angeles Contemporary is an annual contemporary art fair held at the Barker Hangar in Santa Monica. The air was brimming with exciting new energy that we felt the moment we stepped out of our cars. An installation of white shoes greeted us in the lot. We politely stepped over a performer laying on the red carpet in a red bodysuit, an appropriate camouflage. 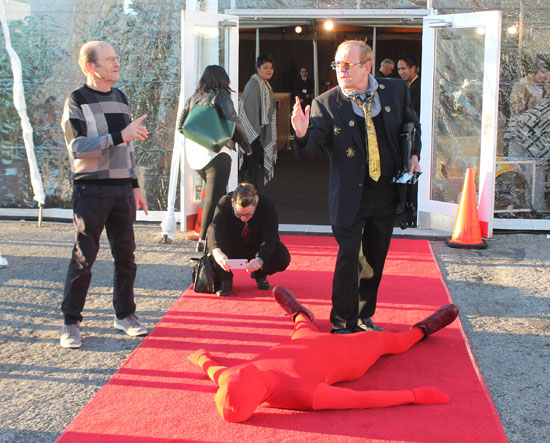 See image: Dr Robby Gordon gets into the act with a performance art peice

Breezing through the booths to get a feel for the fair in it’s entirety, Shulamit Nazarian stood out amongst the crowd. As a Venice local, I am familiar with this hip gallery and their youthful exuberant programming. I got the chance to speak with gallerist Shulamit and she informed me on their new location opening in Hollywood in less than a month. “We’re opening a new space, it’s about 3,500 square feet. It’s in Hollywood just south of Melrose on La Brea – used to be a car garage and has really been transformed. It has a buttress ceiling with a large exhibition space that we’re very excited about.” – Shulamit Nazarian.

I asked her about the changing LA art scene and the strategic decision behind opening the new location in Hollywood. “I feel that a lot of cutting edge, really cont 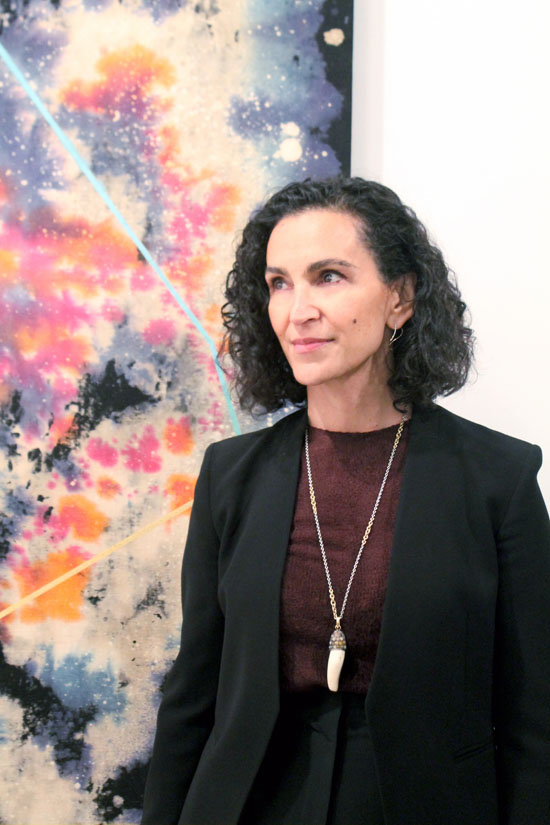 emporary art galleries are moving into Hollywood and that area. With the issue of traffic, it is nice for the art audience to be able to hit as many galleries as they can in one day. We feel that can help us all.” – Shulamit Nazarian. I was curious to hear more about Shulamit and her background in art. “I am an architect and Iranian transfer to America. I always thought it was nice to learn about people through their history, heritage, and culture. I felt contemporary art was the best medium to be able to expose your ideas and your thoughts – whether they are futuristic or looks to the past. I felt these were important messages to be given through the medium of art.” – Shulamit Nazarian.

We finished the conversation talking about her roster of artists and the qualities they share. She explained her interests in her artists and the inaugural exhibition opening at Shulamit Nazarian Hollywood. “Most of our artists are interested in their identity and politics. They all share that in one way or another and carry those ideas out in their work. February 18 is our new opening. It’s called “Escape Attempts” curated by Kathy Battista. Our inaugural show of seven female artists that are talking about feminism and minimalism and how artists are looking back at minimalist history and how it has been primarily male dominant. These women are taking these ideas and the identity – how they feel it. It’s going to be a very dynamic show – seven women from very different backgrounds – New York, LA, Germany – and yet they share a vision.“ http://www.shulamitnazarian.com/

Walking around the fair was both exhilarating and highly stimulating. We strolled the white-walled labyrinth in quest for the visionary best. Honor Fraser made for the best utilization of space with their colorful minimalist installation by Victoria Fu. Dan Levenson’s installation at Susanne Vielmetter schooled us on the history of art. Yautepec from Mexico City streamlined their artist roster in two digital touch screen catalogues, almost like an Amazon for expensive art. 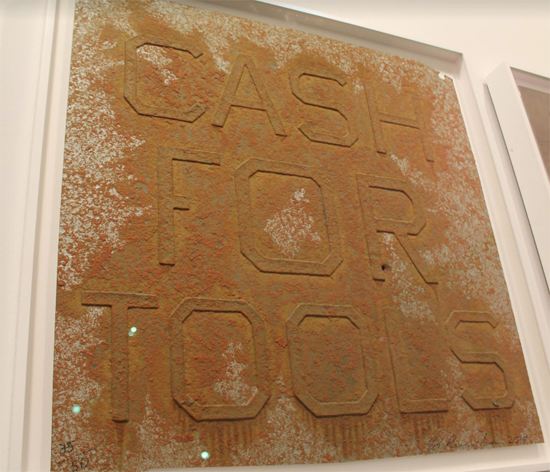 Los Angeles gallery Michael Benevento Gallery gets the award for strangest sight with the work “Nude Shoe” by Martin Solo Clement. Jamie Warren, the gregarious goofball of the art world made an appearance at The Hole Gallery from NYC. Jenny Holzer’s words cut like swords in an auspicious print edition on display at Alden Projects from NY.

Luis De Jesus gallery from Los Angeles pushed conceptual boundaries while still exhibiting work that is aesthetically beautiful and reminds us that painting is not dead, and neither is craft. The large cyanotypes by Lia Halloran were both impressive in scale and technique.

Using cyanotype chemicals, one of the oldest photographic techniques, 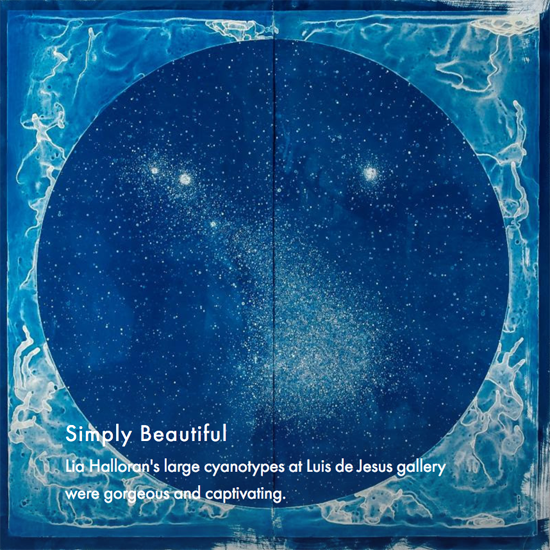 she created prints from her paintings on vellum that honor women’s achievements in astronomy. Her celestial cyanotypes not only honor female scientists, but also reference Anna Atkins – the first major female photographer who created a series of cyanotypes of her fern collection.

Cyanotype is a process of using chemicals that are photo sensitive such as Potassium Ferricyanide and painting them to paper in the dark. Once dried, the paper is then exposed to sunlight with a negative of some kind, and the resulting print is revealed by washing the paper in water. Halloran’s work honors the sun, the photographic process, and the history of female achievement in a cohesive and captivating aesthetic.

David Lynch’s small works on paper lined the booth walls of Kayne Griffin Corcoran’s booth like a neo-classical French salon. Using watercolors, graphite, and other drawing mediums, he creates hauntingly beautiful scenes that flow together to create dark and mysterious storyboard. Genevieve from KGC gave me a brief history of David Lynch’s art practice: “We have a solo presentation of David Lynch’s works on paper from the past decade and also two sculptures. He went to art school in the 1960’s and created a works on paper, paintings, sculptures, and photography simultaneously with his film career. 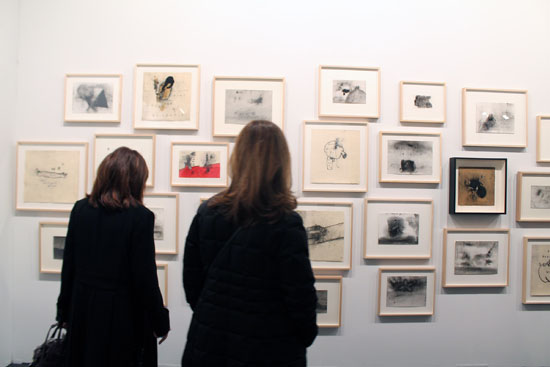 In fact, it predates his film career. He wanted to create a moving painting and so he created a painting and overlapped a film on top of it and that kind of began his film career – 3-dimensional painting. He thinks of them as separate activities but they are all in the same world, the same language.”

Ever Gold Projects, based out of San Francisco, exhibited a duo show by artists Petra Collins and Petra Cortright. This Petra-fying display brought simple and colorful imagery to the fair, creating a meditative space amongst the cacophony of the crowds. It was a pleasant surprise to see Petra Collin’s photography in person, she is quite the Instagram celebrity and I have been following her work for years now. Not only were the images serene, by the large printing and framing was museum grade quality. 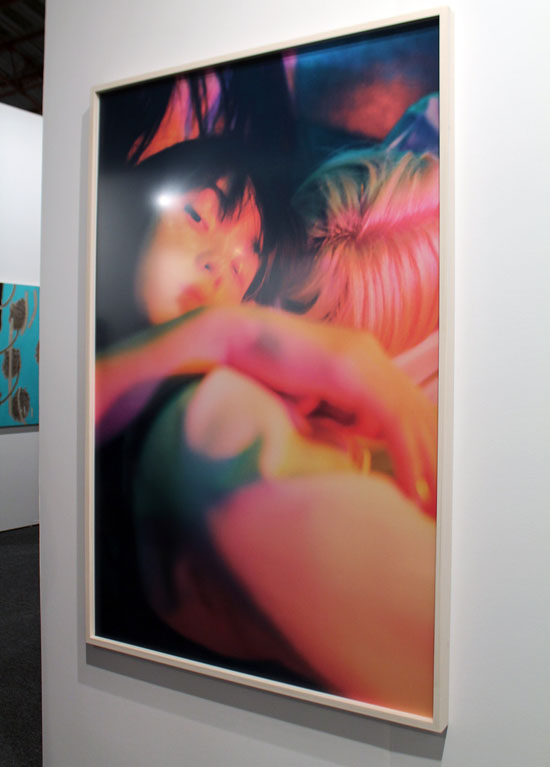 esentation was key and further enhanced the work. I spoke with Andrew from EVP and he gave me the run down on the Petra/Petra duet: “This is a two-person booth of Petra Collins and Petra Cortright, two artists that I have been working with for a while. We though it would be fun to do a Petra/Petra booth, they’re both friends and their work is reminiscent of each other. They both have an interesting aspect of their career working in fashion: Cortright has done videos for Stella McCartney, Collins has worked with Gucci and Adidas.”

I was especially interested in Collins work and wanted to hear more about her art career. “She is a 24 year old artist originally from Toronto. She started working for Richard Currin when she was 15 and then started working for Ryan McGinley when she moved to New York. Through that, she has always been involved with fashion and editorial but also art too, obviously. So, for her, everything else is an extension of her art practice. It’s a very contemporary outlook, everything comes together. The traditional boundaries got broken down, and its great to work with two really incredible young female artists.”