A PARIS LOVE STORY, is Felder’s love for Paris, the love for his mother and his love for Debussy’s music. I’m already a huge fan of Hershey Felder having seen his productions of the life of George Gershwin and Ludwig van Beethoven, part of his critically acclaimed “Great Composer Series” of one-man shows, which have also included Leonard Bernstein, Irving Berlin, Fréderick Chopin, Franz Liszt and Pyotr Ilyich Tchaikovsky. Photos, courtesy of the Wallis; 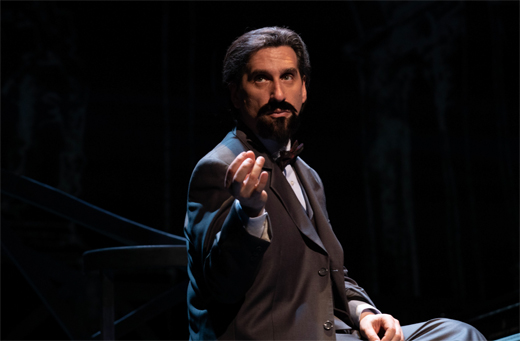 Thoughtfully directed by Trevor Hay, Felder tells the story of the life of the impressionist composer, Claude Debussy. What’s different about this performance however, is that it is a personal journey for Felder as he retraces his steps to when he was 19 years old, and travels to Paris for the very first time to somehow connect with Claude Debussy; he goes to Cathédrale Notre-Dames, where he must stand on the same spot at midnight on March 25th, the date of Debussy’s death in 1918 – it is a powerful and heartfelt moment for Felder. The parallels of the lives of Felder and Debussy are revealed as he talks about how they both lost their mothers at a very young age. The play starts out with Debussy’s song, Clair de lune which means moonlight. This is significant and personal because the last words Felder’s dying mother says to him are, “Remember the moonlight” – she adored the music of Claude Debussy. Debussy watched his mother suffer for years and was very close to her. Felder tragically lost his own mother when she was just 35 and he was just 13. We discover Felder, whose love for his mother touchingly persists even 37 years later.

I’m always in awe of Felder’s storytelling and brilliant piano playing. And this is no exception. Felder is not only writer and performer, he also has created the scenic design. We are transported to Paris on the well-known Pont des Art, a wooden bridge across the River Siene. The added dimension of a piano on the middle of the bridge makes the play feel even more dreamlike and surreal. 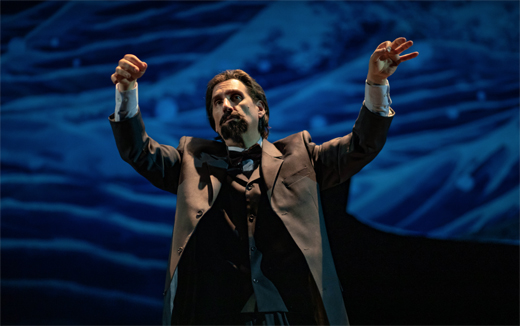 Felder as Debussy, explains his approach to create music based on his impressions of nature. When he listened to raindrops falling or watched moonlight dance across the water, he created what he felt; to evoke the echo of “a world of dreams.” Felder said these were unexpected harmonies and referred to them as “harmonic invention.” I really enjoyed Felder seated at the piano; with the Seine and the Eiffel Tower in the background, with animated rain, featuring reflections on the water – it was beautiful to watch and listen to simultaneously. Felder went on to reveal that Debussy did not emulate any other composers of the day. Instead of creating music in one key, he moved fluidly between keys, which was unheard of at the time. This is why he has been called the father of jazz. Many subsequent musicians have been influenced by Debussy: like Charlie Parker, Dizzy Gillespie, and even George Gershwin.