The 3rd Annual Malibu Guitar Festival kicked off last night, Thursday May 18th with its opening night benefit at Casa Escobar in Malibu. The festival brings together some of the world’s greatest players for four days of guitar worship featuring unique jam sessions, guitar demos, and even a one-of-kind guitar themed art show.

Festival Founder and Chairman Doug Deluca, along with his wife Alejandra Armas DeLuca and Founder/Co-Chairman John Watkin have set up an event that carries a message of unity, peace, and celebration through music, art and social commitment to the community, schools, charitable organizations and our land. At Thursday night’s benefit, the trio extended their hospitality to the crowd and the feeling was like being invited into their home. And, it was all for three great causes:

• TheraSurf – who take handicapped kids out into the Malibu waves.
• Emily Shane Foundation – provides individualized intensive mentoring to struggling/ failing middle school students in the mainstream classroom.
• The Karl LaDue Wodakota Foundation – committed to the education of native American youth with knowledge and skills that enable them to embrace their traditional heritage and culture 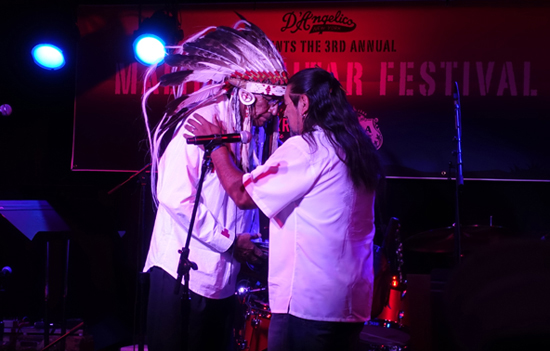 Before kicking off the music, the festival honored Chief Arvol Looking Horse who led the fight against the North Dakota pipeline and is the Chief of All Stars Nations and Keeper of the Sacred Bundle for the Lakota, Dakota and Nakota Nations.

After the Chief spoke briefly and eloquently about the importance of standing up to your beliefs in these troubling times, it was time for some music and it was the night’s third act – Laurence Juber who established that this evening was all about guitar. Juber, a former lead guitarist with Paul McCartney’s Wings has a unique fingerstyle that provided the crowd its first jaw dropping moment with an amazing rendition of The Who’s “Won’t Get Fooled Again.”

After Juber’s dazzling performance, two-time Oscar nominated composer Marco Beltrami took the show for an experimental turn with a 15 piece band that played a piece specifically composed for the evening. The evocative piece emphasized the masterful musicians in the ensemble allowing them all to shine and to demonstrate Mr. Beltrami’s genius. 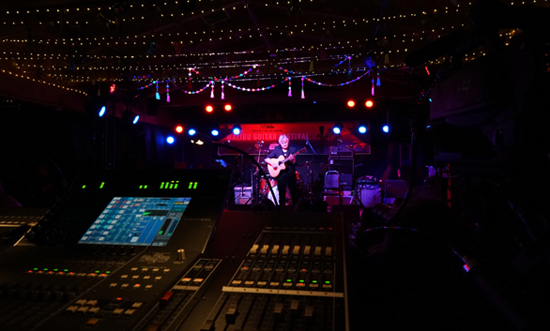 The Kenneth Brian Band featuring Tom Petty and the Heartbreakers’ drummer Steve Ferrone took over the reins with a performance featuring blistering guitar work, spot-on harmonies, and a stellar rhythm section, all tied together by Brian’s honest voice. The music continued to heat up when veteran rockers Waddy Wachtel and Bernard Fowler joined the stage for some classic takes on Warren Zevon, David Bowie and the Stones.

Waddy and Bernard left the stage and their spot was taken over by master lyricist and satirical storyteller John Hiatt, who the Los Angeles Times calls “…one of rock’s most astute singer-songwriters of the last 40 years.” Hiatt played a brief set that accentuated his soulful, gritty voice, reflective lyrics and masterful songwriting. 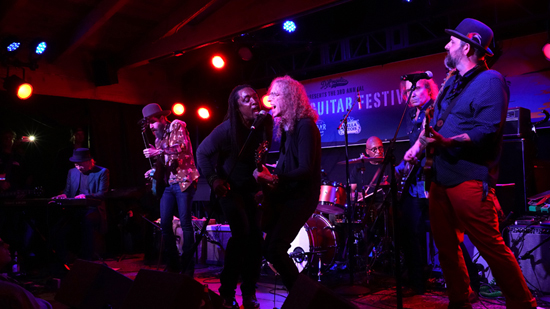 After several hours of music, it was time to step back, reflect and pay tribute to another one of the night’s honorees – Robby Krieger. Mr. Krieger was presented with a Lifetime Achievement Award from his longtime collaborator – the extraordinary, engineer/producer and L.A. native Bruce Botnick.

Mr. Krieger then strapped on his guitar and showed the crowd why is a rock ‘n roll hall of famer – playing several Doors classics backed by an extremely talented band that featured Malibu young hot-shot Daniel Paige on vocals. Mr. Krieger then drew the band into jazz fusion territory playing tunes by Jeff Beck and Weather Report. These tunes proved that Mr. Krieger’s adept technical abilities make him shine in any style of music. 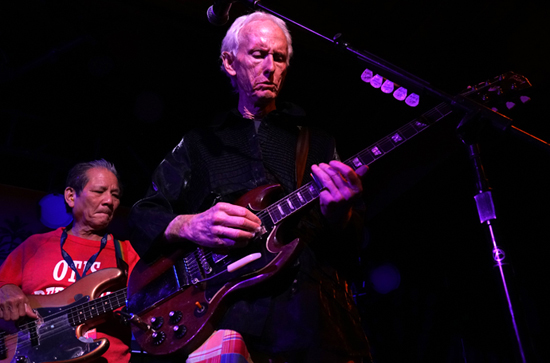 After Krieger left the stage, it was well past midnight, but there was still some gas left in the tank and the crowd got a little taste of Hunter Hayes and The Band Steele. Twenty-five-year-old, five-time Grammy nominee Hunter Hayes hit the stage with tons of energy and guitar fury. Hayes may be a country music favorite, but, his performance was unadulterated rock ‘n roll that really revealed his impeccable guitar ability. The Band Steele made up of a couple of high school friends, performed a couple of acoustic originals that highlighted their gifts particularly that of singer Bo Steele. These remarkable musicians along with many others will be playing full sets over the weekend.

Overall, it was an unforgettable night and it was just the beginning! So, if you are a guitar lover and who isn’t – then head down to Malibu this weekend for an extraordinary event you will leave you speechless and may make you pick up that old guitar you have in the closet or under the bed.