Skip to content
Requiem for the Forgotten: the Armenian Genocide

Dia de los Muertos, is a celebrated ritual for those who have passed on in the Mexican culture. Avenue 50 Studio in Highland Park brings to life two views of death concurrently in one gallery. Director and curator, Kathy Gallegos, invited Sophia Gasparian, a politically charged artist, to curate a portion of the exhibition about the Armenian Genocide. This tragic time in history, which occurred in 1915, is still honored and remembered by modern-day Armenians.

Upon entering Avenue 50 Studio, one is immersed in celebratory imagery as part of the Dia de los Muertos: Celebration of Life exhibit.Throughout this glorified ritual,flowers, shrines and mementos of lives savored create a sense of pride and deep acknowledgement. Veering to the left of the main gallery, you are steered into another world. At first look, you see a childlike theme, confronted with the harsh reality of genocide. As the images collide, you are transfixed on the horror, as seen through a vulnerability and tragic ambiguity of a child.

Requiem for the Forgotten: the Armenian Genocide is a haunting exhibition, curated by artist, Sophia Gasparian and featuring works by herself, Kaloust Guedel, Arpine Shakhbandaryan, and Zareh. Gasparian collaborates with such contemporaries as Lydia Emily, Terri Berman, Daisuke Okamoto, Douglas Alvarez, Farzad Kohan, and LeNic to further demonstrate how the lines of oppression are blurred. The blunt subject matter of this exhibit includes many forms of racism and fear based ignorance used to squelch the oppressed. These images co-exist in this exhibition as a sort of shared tragic solstice. 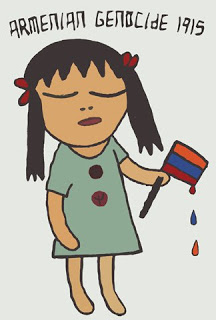 Pomegranates (a symbol of the Armenian culture) take the form of skulls when bleached and piled on top of one another. This visual proves to provoke further symbolism of a shattered culture by supporting the heavy weight of a wrought iron cross in the corner. Directly above, are the collaborative efforts of the artists. Though the themes vary, these images identify a longing that unites each of us. An insurmountable triumph of love prevails through the eyes of the innocent with tributes to late rapper Easy E, as well as John Lennon. Voicing the echoes of a people tossed aside, Requiem for the Forgotten forces the viewer to reflect on the dimension of the theme of equality and the government’s view or lack of acknowledgement of these horrific events.

Sophia Gasparian is the voice of her generation. Though she has curated before, Sophia is first and foremost a painter. Gasparian is known for her sociopolitical work. As an artist, she thrives on blatant political subjects. She runs full steam ahead into the relentless despair, never avoiding the harsh provocative residue. Sophia stands strong in her own vulnerability.

Gasparian draws strength and inspiration from her great-grandmother’s story. At six years old, she was hidden by neighbors after her family was killed. Sophia offers the viewer a direct eradication of her soul. She provides a glimpse of the innocent, inflamed by the stories passed down from her family.

Sophia Gasparian was born in Armenia and currently lives and works in Los Angeles. She has been creating art since she was twelve years old. Sophia uses nontraditional media, such as stencils, stickers, and spray paint, in her work.

Stop by Avenue 50 Studio before November 4th for the chance to take in Requiem for the Forgotten: the Armenian Genocide in conjunction with Dia de los Muertos: Celebration of Life. Both exhibits stand on their own, reflecting each other’s loss, yet whirling in a constant contradiction. Avenue 50 Studio is located at 131 N. Avenue 50, Highland Park in Los Angeles. 323-258-1435. For more information about Sophia Gasparian, see her website at www.sophiagasparian.com.