Skip to content
Pick of the Week…The Loft at LIz’s “Diverted Destruction 7” this Saturday, June 28th! 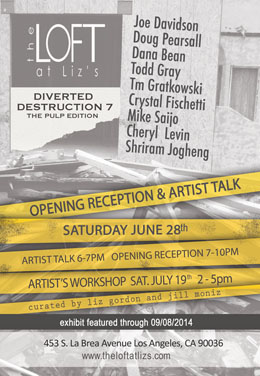 ick of the Week…takes place at one of my favorite galleries. The Loft at Liz’s is an alternative space and a hidden gem in LA’s art scene. The art space is above an incredibly magical hardware store (you could spend hours in this place). Though there are two entrances to the gallery….most people trek through the hardware store to the gallery upstairs, often getting sidetracked by the one of a kind handles and knobs and other classic hardware. Whichever entrance you choose…as you walk up the stairway, art is everywhere…from the bottom of the staircase…all the way to the top. Gallery owner, Liz Gordon is always in attendance, welcoming guests with her usual old world charm and gusto.

This group show celebrates the art of reyclying. An incredibly important necessity, the exhibit is another reminder that recylcing needs to be part of our everyday lives.

Here is some info on the exhibit from the gallery:

This year’s Diverted Destruction, the seventh iteration of Liz Gordon’s passion for the beauty of the process and outcome of recycling, brings together an eclectic group of artists from the greater LA area and beyond. Co-curated with jill moniz, DD7’s theme concentrates on the multiple perspectives of reusing ephemera.

moniz pushed the boundaries of the exhibition guidelines, including works that repurpose paper in addition to the strictly recycled ephemera. 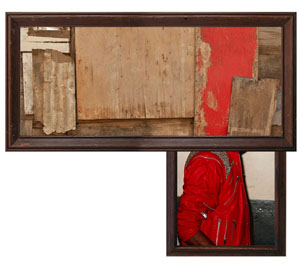 ULB art professor Todd Gray reimagines his past to create a new conversation between the work he produced as Michael Jackson’s official photographer and the images he captures in his second homeland of Ghana, on the Sub-Saharan African coast.

While LA based artist Joe Davidson is focused on the practice of recycling his literal past: old financial statements and moniz’s healthcare statements, and letting the reduced paper pulp speak for itself.

TM Gratkowski, Doug Pearsall and Dana Bean juxtapose issues of urbanity with sometimes playful and always meaningful interpretations of the confluence of art and life. Pearsall collages Trader Joe’s bags, creating an entirely unique aesthetic sustenance. Bean uses popular periodicals to translate the angst of city living with a focus on LA’s landscape. Gratkowski’s three dimensional chandelier exposes newsprint in a whole new light, while his 2D images have all the tension and beauty of modern life found in the pages of his favorite newspapers, magazines and books. 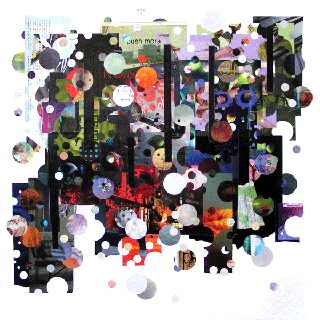 e: More Traditional Art Was Nothing But Free Juice – by Tm Gratkowski, 30 x 30″ Paper on Paper

Mike Saijo deconstructs books from the bindings, but never from their meaning. His work recaptures icons of art and architecture, with a focus on how we read and contextualize visual culture. As a visitor to LA and elsewhere, the U.K’s Crystal Fischetti uses tourist detritus to document and reframe these destinations with a concentration on feeling rather than reality. Dramatist and visual artist Shriram Jogheng (India) offers up works of bold color, graceful form and impassioned movement. His approach is self-described as Einsteinism as applied to arts, demonstrating the interrelationship between theater and painting.

Finally, in the project room Philadelphia artist Cheryl Levin expands an idea born from scraps of metal found in her husband Bob Phillips’ studio, Phillips Metal. After his unexpected death, Levin married these shapes with her own former artistic explorations on paper. She reimagines this union in various media, once again stretching the multiple levels on which artists are able to creatively illustrate the concept of diverted destruction. 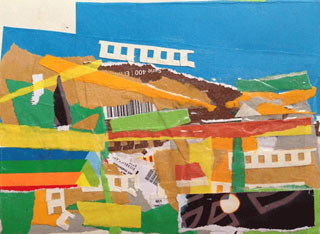 All the work in DD7 intensifies to the ongoing, important dialog about reusing materials in the environment that would otherwise go to landfills. The contributing artists and the curators believe in both the necessity and aesthetic value of such work. This year, on opening night, an artists’ panel will allow for a larger conversation about these issues and launch the celebration of Diverted Destruction in a new way. Our annual Diverted Destruction artist’s workshop (7.19.14) is free and open to the public. This year’s workshop will focus on specifically on paper media.