Lots going on this week….the LA Art Party crew has done the research and listed all our favorite events through the weekend. There will be NO Weekend Update kids. Ok, now don’t get you knickers in a twist, you’ve got lots of choices…and Mama needs a break. I’ll see ya back here Wed, Sept 25th. 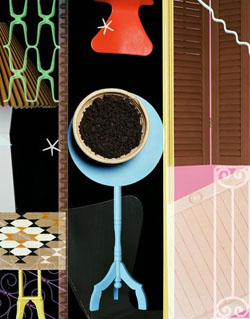 Here’s what the gallery has to say about it…..On view is a selection of new works ranging from Matisse- and Braque-inspired multiple-exposure still lifes, to landscapes from Tasmania and Montana, as well as a portrait. The title refers to a statement made by King Gustav V of Sweden in 1930 upon the return of the remains of three polar explorers. Their bodies had been recovered, by chance, 33 years after a failed balloon attempt to reach the North Pole left them dead on a remote island in Norway.

Photographic analogue materials are well suited to using multiple planes of depictive information­. Film allows for the accumulation of discrete exposures on a single piece of material. 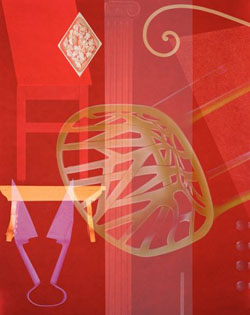 It is the record of the event, the visual reference of the subject, the template by which one composes, and the agency of the process. Within the frame, objects stack on top of one another, blend where they overlap, and flatten pictorial space. The process allows photography—a visual language of boxed, still images—to collage multiple topics into single frames: colony collapse, Herbert Matter posters, Navajo blankets, Arne Jacobsen chairs, and ash from an artist’s studio destroyed by fire. Together, they form a reticulated pattern of overlapping subject matter.

I have an Arne Jacobsen knock-off chair in my studio, I see them scattered throughout the institution where I teach part-time, and they adorn the lobby of a glowing, glassy-faced condominium that I pass on the way to the subway. Mine is black, but the others are brightly colored, functioning like garnish on the pale, monochromatic hues of open, semi-private spaces.

One of the works, Isle of Mountains, features a small bowl of dirt—dark, moist, and brown against the pale blue of a table. It was scooped from the ground in the Tarkine region of northwest Tasmania, a sprawling rainforest known for frequent reports of Tasmanian Tiger (or Thylacine) sightings. 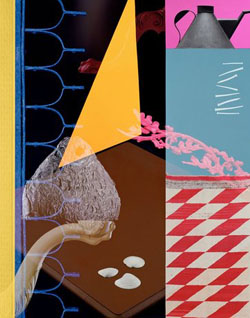 While officially declared extinct in 1983, the last known Thylacine died in captivity in 1933. Because of the large amount of unexplored territory in Tasmania, it is difficult to prove that the animal no longer exists. It is possible that the bowl contains the remains of a Thylacine, dried up and returned to dust.

In 1908, Matisse reflected in a written apologia that he had failed to link his technical ability to any particular conceptual conceit. In his own words, his paintings did not “go beyond the purely visual satisfaction such as can be obtained from looking at a picture.”

Taken out of context, this statement could erroneously give the impression that Matisse believed his paintings to be merely meretricious decorations, yet it would be unfortunate to traduce them using the Marxist belief that the economic and political conditions of an artwork’s production should subjugate its aesthetic properties. His work actually contains some of the early provenances of modernism—pictorial compression of space and a nagging anxiety about a shifting cultural identity—despite the perception of his Fauvist, bourgeois complacency. 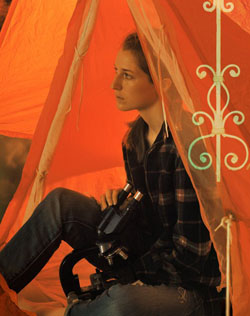 Matthew Porter (b.1975, Pennsylvania) received his BA from Bard College in 1998 and his MFA from Bard-ICP in 2006. Porter was recently profiled in The New York Times and included in the “After Photoshop” exhibition at the Metropolitan Museum Art in New York in 2012, as well as the International Center of Photography Museum’s “Perspectives 2010.”

His work has been exhibited in galleries in New York, Los Angeles, Paris and London and is held in the permanent collection of The Metropolitan Museum of Art, New York and the Statoil Collection (Norway). Porter’s curatorial projects include “Seven Summits” at Mount Tremper Arts, “The Crystal Chain” at Invisible Exports, and “Bedtime for Bonzo” at M+B, which was an ARTFORUM Critics’ Pick in 2011. He is the co-editor of Blind Spot magazine Issue 45, and his writings and interviews have been featured in Triple Canopy, Blind Spot, ARTFORUM.com and Canteen. Porter teaches part time at Parsons The New School for Design in New York, and his first monograph will be published by Mack Books in early 2014. Porter lives and works in Brooklyn.