Our Pick of the week takes place this Saturday…”Andy Moses: Recent Works” opens at the William Turner Gallery at Bergamot Station in Santa Monica. 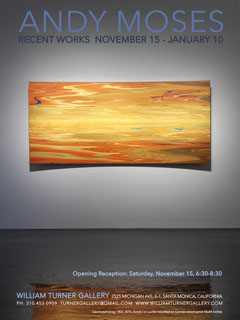 rrounded by art…in the midst of LA’s explosive art scene among its formidable players.

Having a legendary artist as a father can often be viewed as a burden…Yes, I’m sure there are advantages, but the constant comparisons must be incredibly bothersome.

Andy Moses has traveled his own artistic journey fueling his own distinctive voice. He has made a name for himself as an accomplished contemporary artist.

Ed Moses once told me that he believed his son to be a better artist then he ever was. High praise from a talented yet brutally honest man. (if you know Ed…you know he speaks his mind).

I’m looking forward to seeing the exhibition.
Here’s some info from the gallery: Implementing boundary-pushing techniques that he’s been practicing for the past 30 years, Andy Moses creates paintings that blur the line between pure abstraction and a new kind of pictorialism.

These aren’t representational images, yet there are undeniable traces of natural phenomena in Moses’s paintings. He seeks not to replicate imagery from the natural world, but to mimic nature itself. His complex process of altering, mixing and pouring paints is informed by the physical behavior and interaction of his medium with the forces of nature.

Moses’s sweeping, luminous surfaces are executed with an almost impossible precision – a precision that is simultaneously organic and fluid. His meandering lines of psychedelic chroma oscillate between near digital sharpness and dissolving washes of color. In these works, Moses has managed to achieve a unity of line and color that has an extraordinary presence. 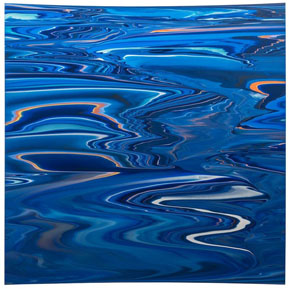 rn in Los Angeles in 1962, Andy Moses attended California Institute of the Arts from 1979 to 1982. At CalArts, he focused on performance, film, and painting, studying with Michael Asher, John Baldessari, Douglas Huebler and Barbara Kruger. In 1982, he moved to New York, where he developed a new kind of process painting that is simultaneously abstract and representational.

As an artist, Moses is interested in pushing the physical properties of paint through chemical reactions, viscosity interference, and gravity to create elaborate compositions that mimic nature and its forces.