Skidmore Contemporary Art presents “Electric Embrace,” by Bradley Hankey. “The paintings in this body of work are based on reference photos I took while on a helicopter ride over Los Angeles, explained Hanky. “I’ve had this idea of painting aerial images from a helicopter for many years, probably from the first time I saw LA from above in a plane. I was finally able to turn this idea into reality, and I took a couple of helicopter rides in 2020 to take reference photos. This was a thrilling experience, and provided me with a new way to see Los Angeles.” 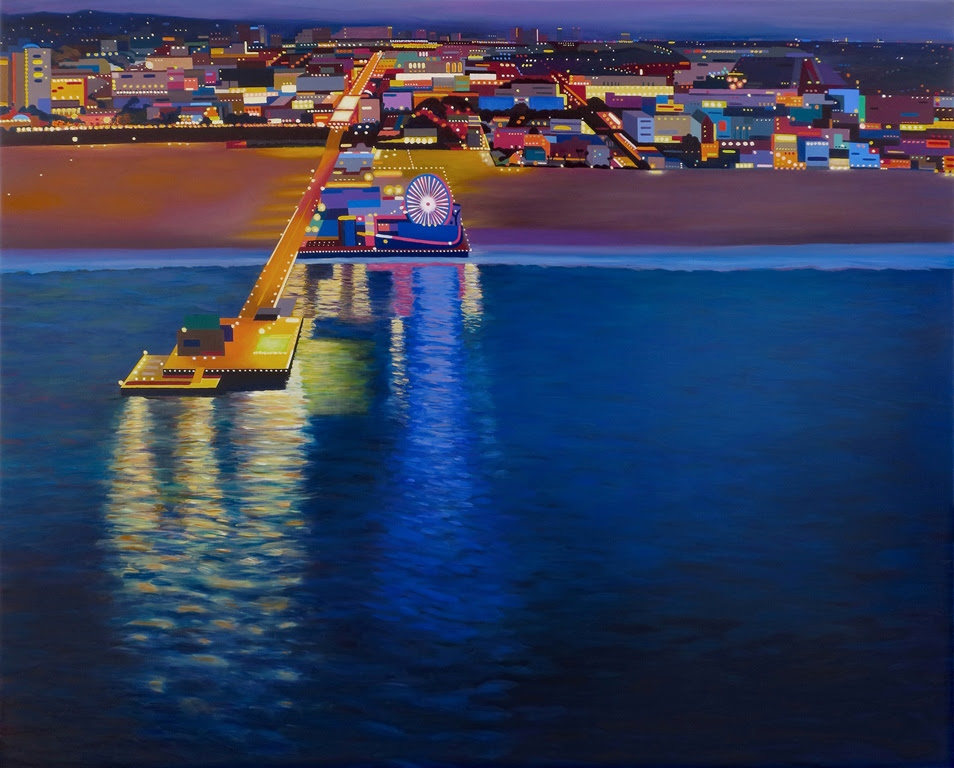 “Most of my work references natural light. I’m used to looking up–my paintings have always involved a lot of sky, with sunsets taking center stage in my recent work. With this series, I was in the sky looking down, and instead of finding color in the sky, I found it in the city lights. This is all about the artificial lights of the city, and the colors and patterns that it creates on the ground. The aerial perspective was challenging. Back in the studio, I realized I needed to create a new system of drawing for myself, to keep track of all of the perspective lines. I used different colored chalks to make sense of all of the lines of the detailed drawings before beginning the painting process. I also went in a slightly different direction with the painting. Generally, my work tends to be tight, with architectural elements represented with crisp lines. These paintings became looser, with painterly brush strokes and blurred lines. The title of the series is borrowed from a recent painting of mine, which originated from a trip I took to Africa. Returning home after spending a month in Tanzania, I was full of mixed emotions; I was devastated to be leaving my new friends and family, but also excited to becoming home to my family in Los Angeles. When we got closer to the city, the familiar city lights spread out below me, and felt welcoming, like a warm hug. Or perhaps an Electric Embrace.“

Bradley Hankey studied at Massachusetts College of Art and Design in Boston, earning a Bachelor of Fine Arts degree in Painting in 2007. His work has been shown in galleries and museums throughout Southern California, as well as Italy, Tanzania and Costa Rica. Hankey maintains a studio in downtown Los Angeles. This is his sixth one-person exhibition at Skidmore Contemporary Art. Eric Minh Swenson is creating a film on the Electric Embrace paintings. We will email you a link as soon as it is available online for viewing!