Hauser Wirth & Schimmel officially opened on Sunday, March 13. The grand opening featured “Revolution in the Making: Abstract Sculpture by Women, 1947 – 2016,” the inaugural exhibition at its new complex in the heart of the downtown Los Angeles Arts District. Through nearly 100 works made by 34 artists over the past seventy years, this ambitious undertaking traces ways in which women have changed the course of art by deftly transforming the language of sculpture since the postwar period. 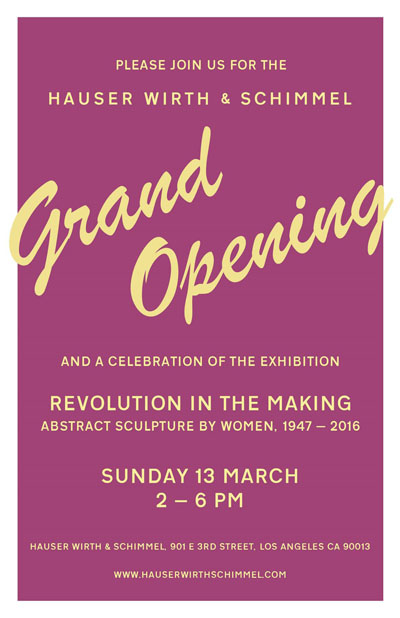 Works on view reveal their makers inventing radically new forms and processes that privilege solo studio practice, tactility, and the idiosyncrasies of the artist’s own hand. ‘”Revolution in the Making” explores multiple strains of artistic approaches, characterized by abstraction and repetition, that reject the precedent of a monolithic masterwork on a pedestal, employing such tactics as stacking, hanging, and intertwining, to create an intimate reciprocity between artist and viewer. T

On view through 4 September 2016, “Revolution in the Making” is co-curated by Paul Schimmel, former chief curator of the Museum of Contemporary Art, Los Angeles, and current Partner and Vice President at Hauser & Wirth; and Jenni Sorkin, art historian, critic, and Assistant Professor of Contemporary Art History at the University of California, Santa Barbara.

“Revolution in the Making” includes many works on loan from nearly 60 major American museums, private collections, and artists’ estates, as well as new sculptures commissioned for the exhibition. The show will be accompanied by a fully illustrated catalog published in collaboration with Skira. This book will include original contributions by Jenni Sorkin, as well as Elizabeth A. T. Smith, former chief curator of the Museum of Contemporary Art, Chicago and current Executive Director of the Helen Frankenthaler Foundation; and Anne M. Wagner, art historian, critic, and Professor Emerita, Modern and Contemporary Art, University of California, Berkeley.

Tracing a Revolution
Feminism changed the course of 20th century art by altering the very notion of what art could be. Hewing to more sensuous materials and the intimate processes of the handmade, women sculptors began to articulate a female sensibility in their work, shifting the dialogue and laying the foundations for a revolution. The late 1940s and 1950s saw women asserting their own content into the formal geometries of post-war abstract sculpture. The collision of Post-Minimalism and feminism in the 1960s and 1970s witnessed women making their boldest breakthroughs and pioneering a ‘no going back’ course for subsequent generations of the 1980s, 1990s, and beyond.

“Revolution in the Making” begins in the immediate post-war era with the historically important predecessors Ruth Asawa, Lee Bontecou, Louise Bourgeois, Claire Falkenstein and Louise Nevelson. Spanning the late 1940s through the early 1960s, these works examine abstraction based upon oblique evocations of the fragmented body and the influence of the unconscious, with seriality and repetition emerging as essential idioms of a new sculptural language. Among highlights here are an extraordinary grouping of Bourgeois’s ‘Personage’ sculptures made in New York and first seen at the Peridot Gallery in 1949. They are juxtaposed with a dramatic installation of a dozen of the most significant hanging looped wire sculptures made by Ruth Asawa. Also on view are bas-relief works by Lee Bontecou, whose use of the void within welded armature achieves a highly original representation of the body, showcasing an aggressive physicality in a shallow space.”Revolution in the Making” continues with the decades of the 1960s and 1970s, and includes works by Magdalena Abakanowicz, Lynda Benglis, Heidi Bucher, Gego, Françoise Grossen, Eva Hesse, Sheila Hicks, Yayoi Kusama, Mira Schendel, Michelle Stuart, Hannah Wilke, and Jackie Winsor – Post- Minimalist artists who ignited a revolution in their use of process-oriented materials and methods.

Among highlights here are two renowned late monumental works by Eva Hesse: the latex and canvas floor work ‘Augment’ and the four-part wall piece ‘Aught’, both created in 1968. These daring and powerful sculptures question the liminal space between painting and sculpture, with Hesse using the armature of the wall and the floor to layer, wrap, cover, and engage space, chance, indeterminacy, and the potency of matter in flux. The two sculptures were first shown in tandem in the legendary exhibition, ‘9 at Leo Castelli’ (1968), curated by artist Robert Morris; the inaugural exhibition at Hauser Wirth & Schimmel reunites them for the first time. Also reunited are Sheila Hicks’ saffron-colored linen and wool ‘Banisteriopsis’ (1965 – 1966) and ‘Banisteriopsis II’ (1965 – 1966 / 2010). 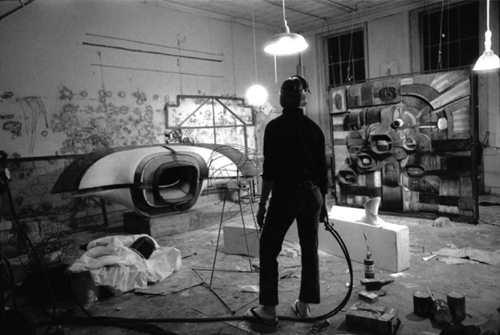 dalena Abakanowicz’s massive 1973 ‘Wheel with Rope’, an aggressive sculpture made of found industrial materials, contrasts with defining 1970s ‘pour pieces’ by Lynda Benglis, who solved the riddle of how to translate gestural abstraction into sculpture by engaging walls and floors in a suggestive violation of spatial conventions. Also here is a large grouping of Hannah Wilke’s ‘blossoms’, which reverberate with nearby works by Mira Schendel and Gego, European émigrés whose delicate sculptures reinvented the notion of drawing as a spatial celebration of the artist’s one-on-one relationship with her materials. In one of the most dramatic gestures of ‘Revolution in the Making’, Jackie Winsor’s soaring ‘30 to 1 Bound Trees’ stands at the center of Hauser Wirth & Schimmel’s sprawling outdoor courtyard, an architectural hub where key galleries of the complex converge and connect. Winsor’s 20 foot-high mast of white birch saplings and hemp rope, originally created in 1971 at the Nova Scotia College of Art and Design and recreated for the first time in its original form for ‘Revolution in the Making’, anchors a space that is both a physical and psychological orientation point, a destination and an intersection.

Perhaps most significant of all, the discreet human body – a central preoccupation of women abstract sculptors in earlier decades – has now disappeared. In its place, the artists in the final section of ‘Revolution in the Making’ offer an empty space for the viewer’s own body. Moving through, under, around, and within these new sculptures, the visitor becomes partner and participant in the continuing quest to articulate the female experience through art.