Maccarone Gallery presents “IndigNation: Political Cartoons by Jim Carrey, 2016-2018,” an exhibition of original political cartoon drawings made over the past two years by Jim Carrey. Selections from an ongoing body of work that began with the November 2016 election of Donald Trump to the office of President of the United States, the drawings on view in IndigNation: Political Cartoons by Jim Carrey, 2016-2018 express Carrey’s views on the current American political climate. 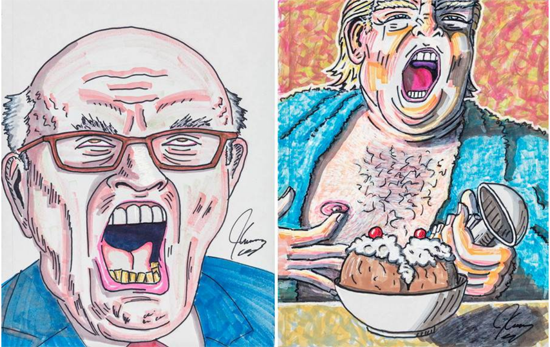 These drawings have been shared with the general public via social media — Carrey has posted these images (and in some instances altered them using computer enhancement) on his Twitter feed along with impassioned, sometimes witty, often introspective or heart-wrenching messages.

The exhibition at Maccarone will be the first to present his original drawings “RL.” Carrey’s decision to share his drawings derives not only from his own perception of our current political climate, but from a belief that freedom of speech is a right that must be exercised in order to remain protected. A globally recognized artist known for his work as an actor and entertainer, Carrey is using his high public profile to disseminate a message — an exclamation, a call for change. His drawings belong to a long tradition of political cartooning in which artists seek to articulate an urgent perspective. Michele Maccarone, founder of Maccarone Gallery, commented “Our gallery has a history of mounting exhibitions that look beyond the orthodoxies of the art world. In its empowered form, art is a vision, a protest, a viewpoint set forth by its maker out of a sense of urgency.

Be aware there is no opening reception for the public to attend. Gallery hours: Tuesday through Saturday 11 to 6pm; On view: October 13 – November 10, 2018