KP Projects celebrated the art of Todd Schorr with an opening art party for “RATTLEBRAIN MELODRAMA” on Saturday November 5, 2022. Don’t fret, if you missed the art party, as you can still view the artwork through January 7, 2023.

With recent exhibitions at The Crocker Art Museum in 2020, and Virginia MOCA in 2018, to Schorr’s epically received midcareer survey in 2009 at the San Jose Museum of Art, recognition by the museum world has solidified what the gallery and collecting public have known for decades — that Todd Schorr is a giant in the Pop Surrealism movement. Though he shares that group’s interest in Lowbrow culture and post illustration / comic graphic style, Schorr’s operatically ambitious compositions, rich in precise detail and evocative atmospherics, plus his particular flair for wry insight and social commentary, has set him apart even among the genre’s best-known practitioners. 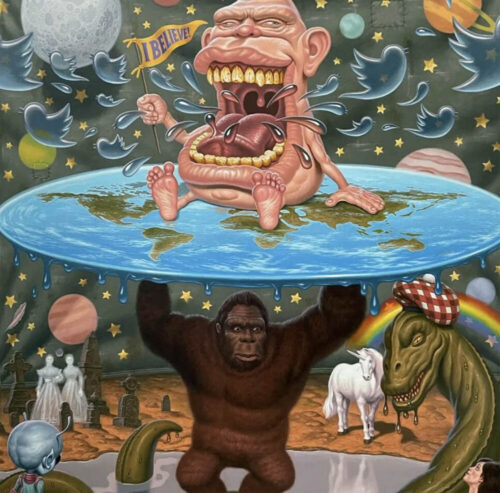 Artwork by Todd Shorr; courtesy of the artist, and gallery

Todd Schorr was born in New Jersey and moved to Los Angeles in 1999. As a child, he showed a compulsion for drawing at an early age and was enrolled in Saturday morning art classes by the age of five. Deeply affected by fantasy movies such as the 1933 classic King Kong and the early animated cartoons of Walt Disney and Max Fleischer, their influence along with comic books such as Mad would have a lasting effect on Schorr’s developing visual vocabulary. While visiting the Uffizi gallery in Italy on a trip to Europe as a teen, Schorr began to formulate his idea of combining his love of cartoons with the techniques of the old masters.