UCLA’s Center for the Art of Performance (CAP UCLA) presents Bill T. Jones/Arnie Zane Company: Analogy Trilogy, a new and ambitious three-part work from the acclaimed performing arts group, Bill T. Jones/Arnie Zane Company during two performances, Saturday, Nov. 3 – Sunday, Nov.4 at Royce Hall at 2pm. All three works — Analogy/Dora: Tramontane, Analogy/Lance: Pretty aka The Escape Artist and Analogy/Ambros: The Emigrant — will be presented in one seven-hour marathon performance that includes all three works, dinner and a post-show Q & A with the company. 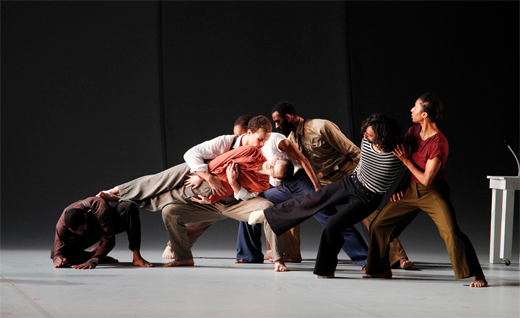 Conceived, directed, and choreographed by Bill T. Jones and Associate Artistic Director, Janet Wong, over the course of four years, the Analogy Trilogy explores the different types of war we fight, including the war we fight within ourselves. The three-part work seamlessly joins three varying narratives with the overarching theme focusing on memory and the effects of powerful events on the actions of individuals, predominantly on their unexpressed inner self. The Analogy Trilogy was first developed and inspired when Jones discovered the W.G. Sebald novel The Emigrants and later inspired when he became infatuated with the story and character of his mother-in-law Dora Amelan, a 98-year-old French Jewish nurse and social worker. Jones felt Dora needed a more percussive counterpart to her stories and began exploring conversation with his nephew, Lance, a young African-American who battles his own demons with drug use.

During the seven-hour marathon performance, Jones’ ensemble delivers a stunning display of dance, song, and spoken word of texts from all three varying narratives. Original music will be provided by composer Nick Hallett and will be performed live by Hallett, pianist Emily Manzo, baritone Matthew Gamble and the ensemble. Décor is by Creative Director, Bjorn Amelan, who has collaborated with Bill T. Jones for 25 years, with Video Design by Assistant Artistic Director Janet Wong. Lighting design by long-time Bill T. Jones/Arnie Zane collaborator Robert Wierzel and Costumes by Liz Prince.

Performers and artists will participate in a post-show Q&A session following both performances. Tickets includes admission to all three performances in the program. There will be an intermission between parts 1 and 2 and a dinner break from 5:30 to 7:00 p.m. A $15 buffet dinner option can be added to ticket orders. The total run time, including intermission, the dinner break and a post-show Q&A with the artists is seven hours (2:00pm – 9:00pm).