Track 16 celebrates 25 years!!! If you’ve been around the art world any length of time, you know Track 16. Known for their outrageous art parties…featuring performance art, and outlandish, outside the box art. We all cried when they were forced out of their home at Bergamot Station, due to the metro station. God knows I wrote several articles trying to stop that train, and help to keep both Track 16 and the Robert Berman Gallery in their original C building location…to no avail. However, the gallery is now stronger than ever and has found a solitary home along with many other galleries at the Bendix Building. 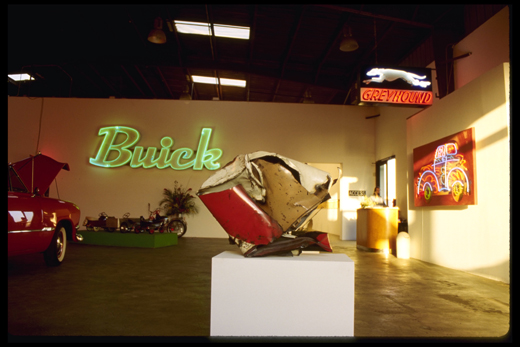 Here is some more info from the gallery:
Track 16 was launched by the obsessive passion of founder Tom Patchett. His seminal Mainspace exhibitions “Wheels”(1994), “Fool’s Paradise”(1994), and “EATS”(1995) were audacious attempts to look at 20th-century America through not just art, but also its ephemeral and ubiquitous siblings, marketing and advertising: a Mark Tansey painting was on the wall near a Bambi Airstream trailer; Mike Kelley’s Banners were hung above a Coney Island mechanical laughing lady; a sixteen-foot-high fiberglass waitress from Freddie’s in Orange County stood as a sentry to the gallery where, upon entering, you were next greeted by half-a-dozen Claus Oldenburg popsicles. The results were loved… and despised.

After guiding “Man Ray: Paris>LA” an exhibition collaboration between Track 16 and Robert Berman Gallery, Pilar Perez became the director of Track 16 for the next five years. She helmed, among many exhibitions, an early retrospective of Manuel Ocampo, an important survey of contemporary Cuban art, and “At the Curve of the World,” an ambitious exhibition of women artists. Laurie Steelink, who had been the gallery’s registrar, began her 14-year tenure as gallery director in 2002. Steelink excelled at working closely with brilliant independent minded artists: David L. Forbes, Simone Gad, Linda Sibio, Le Dernier Cri, Scott Williams, Alan Sondheim, Johanna Went, Gee Vaucher, Mondongo, the Institute for Figuring, and on and on. 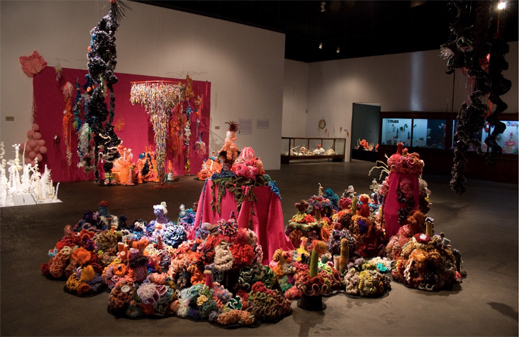 In 2012, the Los Angeles Metro, using eminent domain, evicted Track 16 from Bergamot Station to build the Expo Line train station. The gallery found brief refuge on the Hayden Tract in Culver City. Somewhat burnt out from the seventeen year manic pace of exhibitions and events, they moved at a slower pace. The gallery held only a few exhibitions and concentrated public programing at the theater that they built out of the warehouse’s loading dock. They presented plays, performance art, music, and film in all stages of development. The warehouse was, in the end, limiting. So when Patchett invited Meredith to become his partner and the director in 2017, the first thing discussed was moving the gallery. Meredith was bewitched by a space on the 10th floor of the Bendix Building in the Fashion District of downtown L.A. The location seemed quite outlandish. Meredith didn’t know yet that the building housed even a single gallery. Soon after, Bendix head Steve Hirsh revealed that PØST had recently moved into the building. Track 16 committed to moving in late 2017 not knowing the building would soon have a cultural explosion that now hosts 12 galleries with more planned. As the third director of Track 16, Meredith says, “There is no complex philosophy. A beehive does what it does, as does a gallery. And that’s a wonderful thing.”