The International event….Elephant Parade kicked off this past August. The four-month exhibition is currently on view in Dana Point, CA. 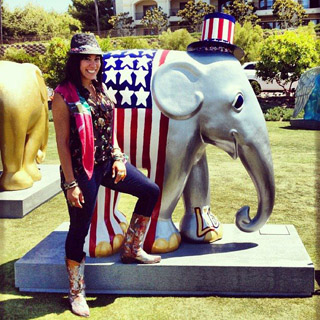 e image: Triumph of Liberty (aka – Mr. Liberty) is currently on display in the Dana Point, California.

Artist Sona Mirzaei had not one but two elephants in the event. Here’s her take on it…..”The opening launch of EP at the St. Regis Monarch Beach Resort was spectacular! Great vistas of beautiful Laguna Niguel, Pacific Ocean, and of course a herd of wonderfully designed elephants by celebrities, royals, local and international artists for this amazing cause and pursuit of help save endangered Asian Elephants.”

EP was created to raise awareness about the dangers that many Asian elephants face everyday. Celebrities, TV personalities and artists have come together to support this important cause. Founded in 2008 by father and son, Marc and Mike Spits after Marc had the chance to meet a baby elephant named Mosha in Thailand, who had a prosthetic limb due to losing a leg from stepping on a landmine.

Sona first became involved with EP back in 2010. She was the only American female involved in both the Copenhagen and Singapore Elephant Parade. Sona has been busy working on two elephants for the “Elephant Parade” here in the U.S. In addition to her solo elephant, ‘Triumph of Liberty,’ she also worked on another one (Rothkophant) with actor Daniel Benzali

She continues, “This event was opened as a world class public art exhibition. All of the elephants in Dana Point has really made an impact on the locals there and tourists alike. I had a chance to meet so many amazing artists – such as Olivia DeBerardinis, Chris Hoy, Cesar Millan, friend Andre Miripolsky, Laura Seely, and Chor Boogie for this amazing cause using our talents has been an awesome experience! 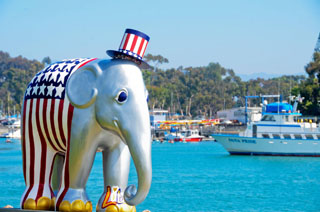 “Elephant Parade: Welcome to America” is currently on display in Dana Point, CA from August 22nd through November 17th 2013.

Don’t miss the auction which takes place on November 17th at the Marriott Cliffs Resort in Dana Point.