Being a huge fan of Genesis in the 1970’s meant discovering some very cool secrets behind the band, such as when I found their EP “Spot the Pigeon” on one of my near-daily trips to Moby Disc Records in the San Fernando Valley. The EP was released exclusively in the UK and was the last to feature guitarist Steve Hackett. Then I came across Armando Gallo’s book “Genesis: I Know What I Like”, filled with incredible photographs from the band’s legendary and spectacularly theatrical shows of the early 70’s, which of course featured the musical innovator Peter Gabriel . But of all the Genesis discoveries, the biggest surprise was finding out that Drummer and vocalist Phil Collins had a Jazz-Rock-Fusion side band called Brand X. 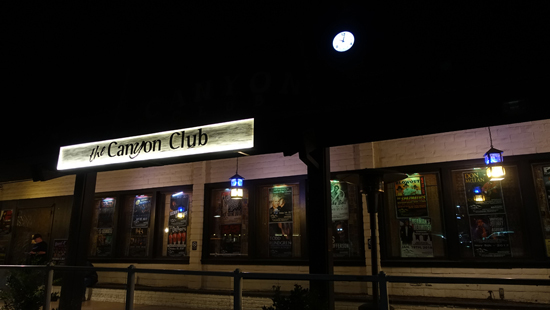 The Canyon Club in Agoura Hills – A hot spot for nostalgic bands of many genres; Photo by Richard Bilow

Today, over 40 years later, Brand X is recognized as a group of true musical pioneers, having helped create an entire musical genre and having influenced a broad spectrum of musicians and bands, from Phish to Dream Theatre. Their contemporaries include Weather Report, Mahavishnu Orchestra and Return to Forever, all composed of amazing musicians crafting their own unique blend of Jazz, Rock, and World influences, now widely known by fans around the globe as Fusion.

With Phil Collins as their main drummer (from 1975-1980), the band released their superb debut album “Unorthodox Behaviour” in 1976, featuring members Percy Jones, Phil Collins, Morris Pert, John Goodsall and Robin Lumley. The guys had been doing sessions for Brian Eno, and decided to join forces and put out an album. The album cover featured artwork from the legendary design collective Hipgnosis (known for their work with Pink Floyd, Peter Gabriel, Led Zeppelin and hordes of others) – a sure sign that this wasn’t just another band. I am a huge fan of the bass and what kept me captivated, just as it did in the days of my youth, was the hypnotic fretless bass playing of Percy Jones: aggressive, sinewy, extraordinarily proficient but always musical. Jones is on a par with innovator Jaco Pastorius. 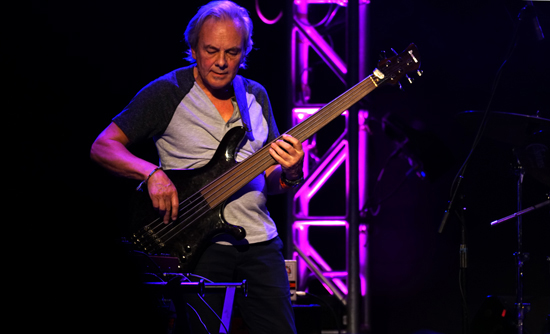 The band’s next album “Moroccan Roll” surprised everyone by hitting #37 in the UK. In hindsight, it turns out they had created an uncanny masterpiece – a fusion album with melodies. Guitarist Goodsall plays a shimmering Sitar on “Sun in the Night” while percussionist Morris Pert manages to bang on everything including a few kitchen sinks. I got the chance to see Pert on Mike Oldfield’s only US tour in 1982 at the Santa Monica Civic. My recollection is of him moving around the stage switching from drums, to timpani, to marimba in constant motion adding nonstop color to the music and creating a spectacle with his relentless attack – I could not take my eyes off of him. The musicians in Brand X, over the years, have been virtual masters. Pert played drums, congas, tam-tam, timbales, flexatone, vibraslap, marimba, vibraphone, timpani, tabla, gong, bell tree, tambourine, bells, kalimba, shaker, jawbone, assorted percussion and keyboards. Sadly, he passed away a couple of years ago. The band went on to release 6 albums before disbanding in 1980. Then they reformed as an augmented trio from 1992-1999, broke up again, then surprised the music world by reuniting again last year.

The reunited Brand X came to SoCal this week with four shows in the area featuring material mostly from their first three albums (“Unorthodox Behavior,” “Moroccan Roll” and “Livestock” – a live album that featured new material). I attended the show at the Canyon Club in Agoura Hills and witnessed these remarkable musicians in action. 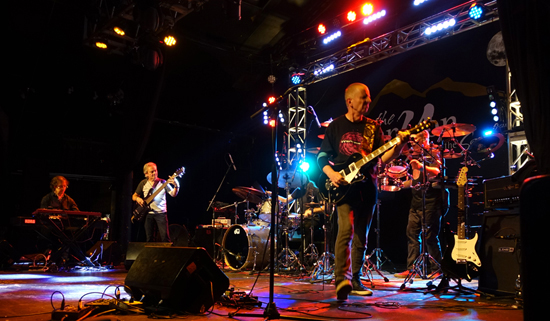 Brand X is known for their unique combination of masterful chops mixed with their childlike melodies. This was evident with the opening number, where Goodsall displayed a nastier, snarling tone, only hinted at on the bands old albums, unleashing a cutting and angular solo, while Jones in fine form kept the frantic pace flowing with his deep, swirling fretless bass. All the while, drummer Grohowski’s arms seemed to flail about like an octopus.

The band had little interaction with the audience verbally and let their instruments do the talking. They didn’t introduce a song until the third number, when they played Why Should I Lend You Mine (When You’ve Broken Yours Off Already) from “Moroccan Roll”. The song highlighted the band’s cohesiveness while also demonstrating their insane musicianship. In particular, Clark’s keyboard solo was masterful. His spare and lovely, but crisp and sharply attacked playing evoked Chick Corea. 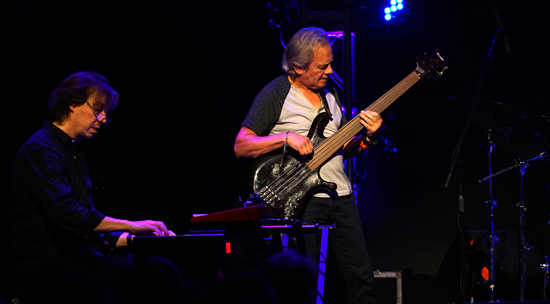 From left to right, Chris Clark and Percy Jones in their mutual zones, Photo by Richard Bilow

Next the band payed homage to their old mate Morris Pert by playing his song Earth Dance from their stellar 1978 effort “Masques”. It was a spotlight for the percussive team of Growhowski and Weinberger. Then, before a brief intermission, the focus shifted to Percy Jones who proceeded to blow everyone’s mind on Noddy Goes to Sweden, from the band’s 1980 album “Do They Hurt?” Give the original a listen here: http://bit.ly/2k3pIax

While the first half of the show focused on the band as a unit, the second half was more about instrumental prowess. Goodsall really let loose and played homage to his influences, particularly John McLaughlin and Allan Holdsworth. Keyboardist Chris Clark soloed and showed a cerebral approach, constructing his solo for maximum chromatic effect – deliberately eschewing any notes that could possibly be expected in a given moment. The result was dizzyingly satisfying. They followed the solo with two of their best – Disco Suicide which is as catchy as it is clever and Jones Malaga Virgen – a furious bass and drums workout. Here’s a clip from a recent performance: http://bit.ly/2i8kHgu

It was appropriate that the band’s final song was Nuclear Burn. The opening track from their debut album could be their best – it has all the elements that make the band shine – a catchy melody, a driving bass line, explosive percussion and stunning solos. Overall, it was wonderful to see these musicians bring new ideas and vigor to the material, with Goodsall and Jones exploring new sounds and Clark, Grohowski and Weinberger bringing their own musical identities into the mix.