Skip to content
Month of Photography Los Angeles is HERE!

The 7th annual Month of Photography LA (MOPLA) promises to showcase a diverse range of contemporary photography in an even wider array of traditional and non-traditional settings. Presented by the Lucie Foundati, the 2015 theme: “Realities and Concepts” hopes to challenge viewer’s ideas of how they traditionally experience photography.

ar sees the return of two popular MOPLA events: the postcard exhibition, “Wish You Were Here,” Vol. 2, and The Instagram Jam, and introduces new and unique programming. Opening week introduces new programs to MOPLA, including a dinner series organized by Victory Projects and hosted by The Standard Hotel, as well as an exhibition curated by Los Angeles Magazine’s Photography Director, Amy Feitelberg. Feitelberg commented, “I’m so thrilled to be curating the show The Stand-Ins for the Month of Photography LA. What a lot of people may not realize is how much preparation goes into the one photograph they may see in an article or an ad. Sets, lights and composition must be tested over and over to get it right before the subject even enters the room. I always thought–that would be a great idea–show the shot before the shot.” She continues, “Each year I look forward to April to see what the new Month of Photography LA line-up is. I love running around town, sharing in friends’ work and seeing new artists. Month of Photography LA is such an extraordinary undertaking and I know of nothing like it anywhere else. It’s such an inspiring way to bring together the creative spirit of this city and celebrate its talent.”

Opening week events include:
April 1: The Official Month of Photography LA kick-off event “Wish You Were Here, Vol. 2” will be hosted by the Ace Hotel Downtown LA. Curated by Stephanie Gonot, an all postcard exhibition featuring a box set of 50 images by 30 contemporary photographers, including Peter Bohler. Exhibition and projection of postcard images will be featured on the rooftop of The Ace Hotel opening night. Postcards will be featured in the hotel rooms and around the hotel for the duration of the month.

April 2: The Stand-Ins exhibition opens featuring portrait and still life images of the shot that comes before the shot: before the celebrity stands on their mark, before the animal is taken out of their cage, while the lights and composition are tested. Photographers include Jill Greenberg, Emly Shur, Dan Winters and Frank Ockenfels III. Curated by Amy Feitelberg, Photo Director, Los Angeles Magazine and hosted by The Icon. 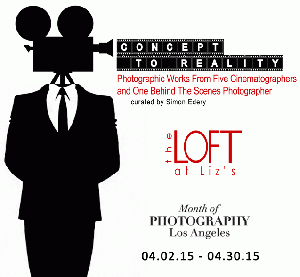 April 3: One Shot: Home, is the annual single-image, themed competition presented by the sister-effort of the Lucie Foundation.

April 11: AS ABOVE SO BELOW A FEATURED MOPLA EXHIBITION