Garry Marshall Theatre presents Deidrie Henry in the Broadway play Lady Day at Emerson’s Bar and Grill by Lanie Robertson for 15 performances May 15 to June 9, 2019. The director is Gregg T. Daniel and playing Jimmy Powers is musical director Abdul Hamid Royal. This is a fantastic show, read my review on the Performance Reviews Page – under the Theater drop-down. 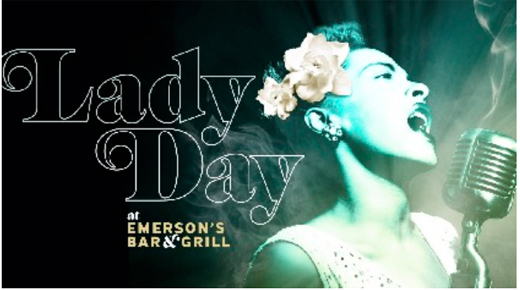 The time is 1959, a seedy bar in Philadelphia. The audience is about to witness one of Billie Holiday’s last performances, given four months before her death. More than a dozen musical numbers – including “What a Moonlight Can Do,” “Crazy He Calls Me,” “Easy Living,” “Strange Fruit,” “Taint Nobody’s Biz-ness If I Do,” and “God Bless the Child” – are interlaced with salty, often humorous, reminiscences to project a riveting portrait of the lady and her music.

There is limited on-stage VIP seating. This immersive experience will put you right in the middle of the action! On-stage seating includes a complimentary bottle of wine or champagne, served right at your table for two! Must be 21+ to access ON STAGE seating. Also the performance on Wednesday, May 22 will be alcohol free, welcoming those in recovery.