“Can’t Pay? Don’t Pay!” has been extended through June 11, 2022. The show, written by Nobel Laureate Dario Fo and Franca Rame originally debuted in 2020, at the start of the pandemic  (and was shut down). It opened once again at The Actors’ Gang Theater in the old Ivy Substation on March 19, 2022. This is a fantastic show, I had the chance to see it, and interview Tim Robbins and Bob Turton. Read it on our sister site EatTravelGo.com – CLICK HERE for the direct link, or go to the Stories Section, Arts Page, under the Art Talk drop-down.

Previews began on March 12, exactly two years from the day the theater was shuttered and had to suspend this hilarious production. Fo’s high-energy, satirical farce is directed by Bob Turton, who won a Stage Raw Award for his role, The Madman, in The Actors’ Gang’s 2019 production of Dario Fo’s Accidental Death of an Anarchist. 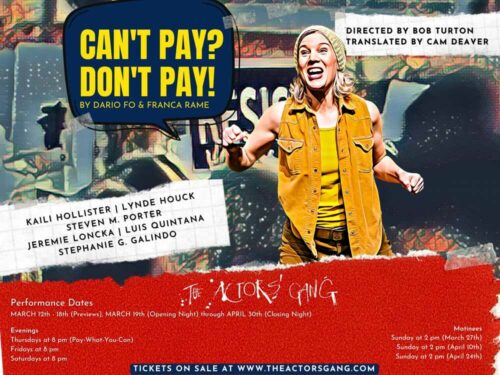 Hungry and fed up by rising prices and stagnant wages, Antonia joins a revolt of women at the local supermarket. Determined to live with dignity and rejecting an austerity diet of dog food and birdseed, the women’s protest escalates, and looting ensues. As police search door to door, Antonia and her friend Margherita frantically try to hide their ‘liberated’ goods from their husbands and the police. ‘Can’t Pay? Don’t Pay!’ questions why, in a world of bailed-out banks and overpriced prescription drugs, theft is only a crime when it is committed by those truly in need. The cast includes Kaili Hollister as Antonia, Lynde Houck as Margherita, Jeremie Loncka as Giovanni, and Steven M. Porter as multiple characters (Agent, Old Man, Sergeant, Undertaker). Can’t Pay? Don’t Pay! will also introduce fresh faces to the original cast, including Luis Quintana as Luigi and Stephanie G. Galindo as multiple characters (Officer, Agent, Nurse, Assistant).

Audiences will have the opportunity to gather again in person at The Actors’ Gang Theater, which boasts a new state-of-the-art air purification system and upgraded HVAC. As The Actors’ Gang celebrates its return to live performances, its reopening lineup is characterized by all the richness and vitality that audiences have come to expect from The Gang.

General admission tickets are available for purchase starting at $35, with previews priced at $25. Seniors and students will enjoy a $10 discount on general admission tickets. For any questions regarding ticketing, please contact The Actors’ Gang Box Office by email at boxoffice@theactorsgang.com, phone at 310-838-4264 ext. 1, or website at http://TheActorsGang.com

Remember to confirm with the venue last minute covid protocols and guidelines – (proof of vaccination and masks MAY be required).