François Ghebaly is proud to present a solo exhibition of new paintings by London-based artist Jessie Makinson. Viewing is by appointment only. Makinson’s paintings are funhouse mirrors of historical and literary references, reflecting these allusions askew. There are 18th century brothel scenes and Georgian parlour games, ancient folklores and contemporary eco sci-fi. The titles of her works come from similarly diverse and diffuse sources; overheard snippets of conversation, quotes from cooking shows and 60s novels, anywhere really, and often taken out of context. Figures twist, bend, sit and splay at uncanny angles across unstable grounds. Their cool stares suffused with puckish ambiguity, simmering schemes, latent desires. 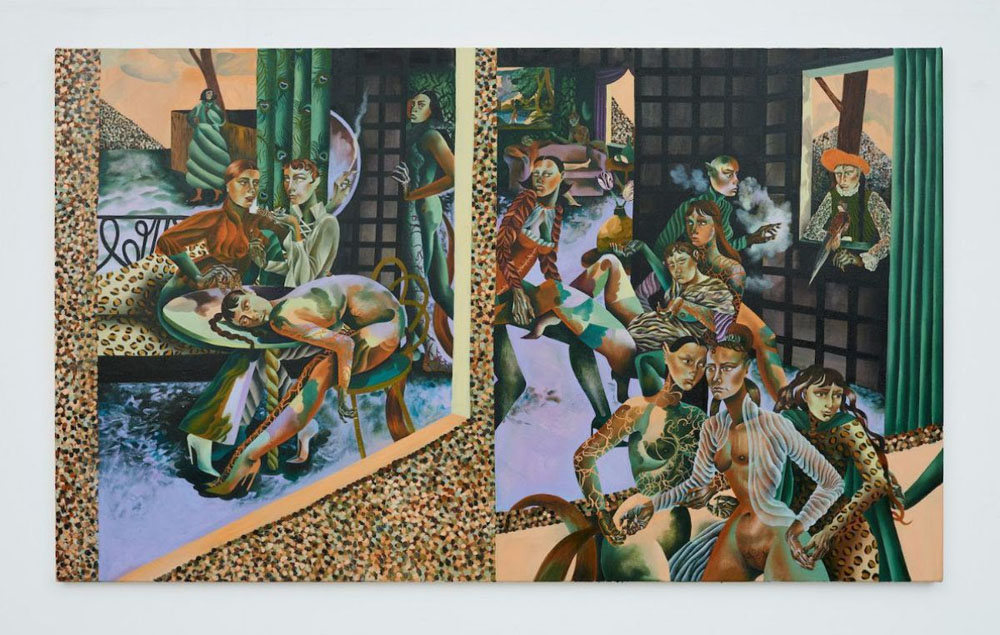 The title of the exhibition, Something Vexes Thee? is a rhetorical question, at once sarcastic and decorous. It’s what’s up with you? wrapped ironically in genteel robes. It is also what the witch asks of The Sheriff of Nottingham after his plans have been foiled once again by the trickster Robin Hood in the 1991 film adaptation of the English legend. Makinson’s painting of the same name is a decentered diptych crawling with potentially vexing vignettes. A couple of fighting dogs have upset a basket of peaches, a parlor game in a backroom equivocally suggests sensuous and sinister play, various limbs jut in and out of frames and doorways, suggesting narrow escapes.