Skip to content
Irina Chelyapov From Moscow to Los Angeles

The art of Irina Chelyapov is currently on view at Santa Monica Art Studios (SMAS) through August 18, 2018. Russian artist Irina Chelyapov was immediately inspired by Los Angeles. However when she first LA, she could not differentiate between the city and the suburbs of Los Angeles. 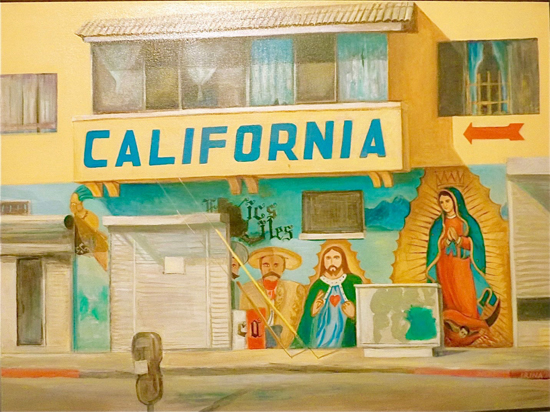 Chelyapov grew up in Moscow, so when she arrived in LA, everything seemed so different to her. “I was somewhat lost,” she explained. “And, maybe, this feeling inspired me to begin my journey for searching Los Angeles’ soul. I just had to understand my new homeland! Driving around LA for many hours, making photos from car window, listening to Mexican music, American jazz and European classics, I somehow got an idea about this place named Los Angeles, California. Very new and very old at the same time. It was like in famous Beach Boys song ‘Hotel California’, “This could be heaven or this could be Hell,” said Chelyapov. Her work “Sunday Afternoon in LA was inspired by one of the photos that the artist would take while on her search for the soul of LA. She continued, “Here is all history of California painted on the wall – Inca in headpiece, Pancho Villa, Mexican Revolutionary general, Jesus and Our Lady of Guadalupe, and, how can it be missed, gang graffiti…Parking meter in front makes this rendition of the place complete.”

Here is some more info about the artist from her website: Growing up in Russia, she displayed exceptional artistic talent at a very young age. At the age of 12, she entered one of the eldest art schools in Moscow, where her teachers were Michael Roginsky, first pop artist of Russian Underground, and Mosey Khazanov, prominent post-impressionist. Irina continued her art education at the Stroganov Academy of Art, the eldest and best art school in Russia, where she earned her Masters Degree in Fine Art and Design. Irina was part of Moscow Nonconfomist Art Movement, which included such names as Grisha Bruskin, Alexander Melamid, Vitaly Komar, Anatoly Zverev, Oscar Rabin, Oleg Celkov, Vasilii Sitnikov, among many others.

In Russia, besides doing fine art, Irina was a successful graphic designer. She created hundreds of logos, posters, letterheads, labels and ads for a large variety of businesses and enterprises. Her paintings and graphic design work were shown at the Biennale International Art Exposition in the Czech Republic, and many other art shows in Russia. 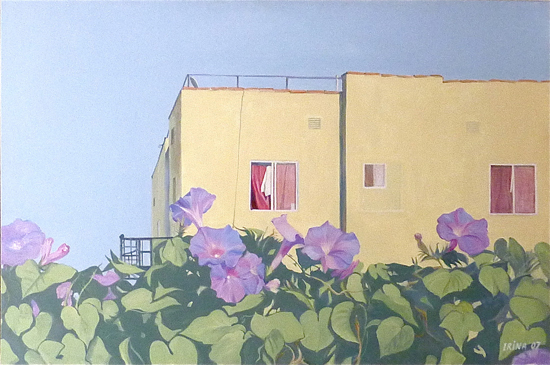 Irina Chelyapov came to the United States in 1989. Here, she began to work with small decorative pieces made for the Pacific Design Center and several Beverly Hills boutiques. Her clients included Elizabeth Taylor, Matt Groening, Candace Bergen, Diane Warren and Priscilla Presley. Irina realized that her art had an amazing decorative quality. Irina discovered the existential beauty of Los Angeles while driving around the city on the way to paint her murals.

Irina says the following about her art, “Highly influenced by artists like Hopper, Warhol, Lichtenstein, and Diebenkorn, I paint multicultural urban Los Angeles with all its contradictions and poetry. I am trying to blend my classical European artistic background with contemporary conceptual approach. In the LA urban environment I am looking for and finding manifestations of eternal human values, such as love, faith, longing, and the strife for a better life. I try to see real people and their life through the facades of the buildings depicted with much love and connection.”