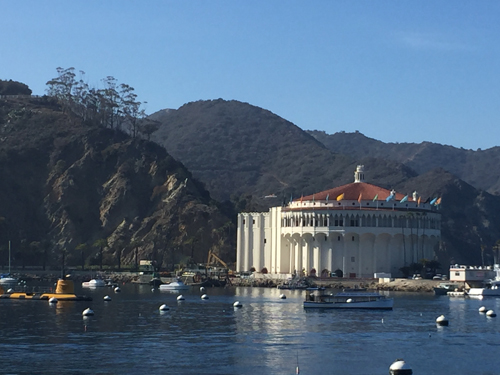 Catalina has long been a great summer vacation destination for many Los Angeles residents and tourists alike.

A one – two night stay can work wonders on eradicating the stress of one’s busy life, so I was quick to say yes when my boyfriend suggested we take advantage of a rare leap year special offered by the Hermosa Hotel.

A one night stay was $29 plus $29 each way per person on the Catalina Express, a fairly large fast-moving boat which transfers visitors from one of three ports near Los Angeles to the island. My boyfriend and I left out of Long Beach for our quick getaway to the Catalina, saving over $100 on our great escape. When planning your trip, do forget to factor in the $17 per day cost of parking at the boat terminal. 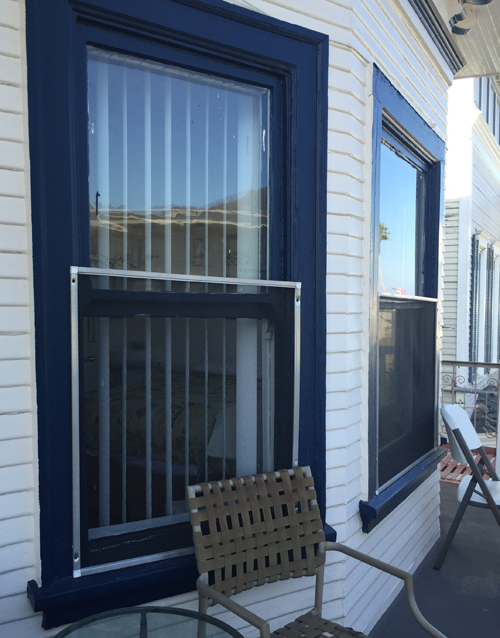 Approximately 2 hours after leaving Long Beach we arrived at the Hermosa Hotel. At first glance the room was simple, clean, but small. Next we noticed the bathroom was situated between two rooms. It was a shared bathroom.

Little did we know we would soon be sharing something else. Our room was located in the front of the building on a busy street. Just outside the room was a shared balcony, accessible to all of the Hermosa hotel guests. It turns out that the Hermosa commonly hosts large groups of scuba divers, so the shared balcony is great for those groups.

Since we had just gotten off of the boat to Catalina along with several other hotel guests, we were immediately taken aback by seeing two to four people right outside our window. They too had just arrived and were checking out the hotel as well as its occupants. That’s when it became apparent we would soon be putting on a show. The vertical blinds were missing sections which would ultimately compromise our privacy. We came to understand the value of the shared balcony for large groups, but the broken blinds could easily have been replaced with drapes. 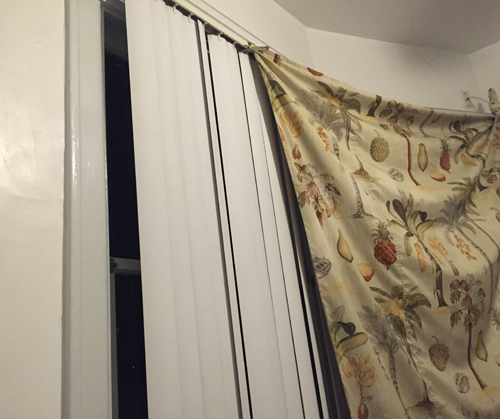 ally since several of the individual blind slats were missing, any one standing on the porch (which remember was open to all hotel guests) could peer into the window and enjoy the show. I looked at my boyfriend and said “well, if you’re an exhibitionist, this is the room for you.” Fortunately, my boyfriend is quite handy and was able to rig up a home made curtain using the bedspread.

The employees running the Hermosa were quite pleasant but had no idea how to fix the situation, other than posting a “wet paint” sign on the door of the balcony to deter entrance. Be aware, we did not make a big stink of it with the front desk ( so there is no way to tell what would have happened if we did). The staff was kind enough to recommend where we could find an inexpensive cup of coffee as well as directing us to other points of interest. They also held our bags after we checked out, so we could explore the island.

Again the staff was great and I suspect other rooms (with a private bathroom and working blinds or at least rooms with curtains) would allow for a more pleasant stay. We were told cottages were available at the same price for the leap year special but on a first come basis.

If you are bothered by street noise this also may not be the hotel for you (unless a room situated in the back of the building was requested). There are more expensive hotels located off the busy streets as options for those who need a quite setting. I personally had no problem with being close to the busy street (unlike my travel companion) but I am originally from New York City and feel at home with the lively city sounds.

So if booking a room at the Hermosa Hotel, they do offer affordable specials…just remember to ask questions. There are great deals to be had in the winter season. Just make sure you don’t book room # 15 unless you’re into that sort of thing!