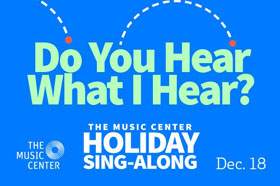 e Los Angeles Music Center hosts a massive holiday sing-a-long.  Bundle up your family and share in the warmth and joy of the holidays with a grand night of singing under the stars.

*Tickets are distributed starting at 6:00 p.m., one per person waiting in line, first come, first served.

Click Here for more info and to order tix 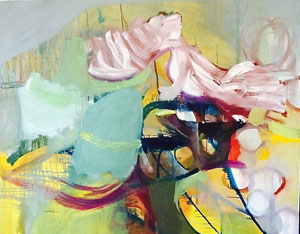 Reading from his new novel in progress, Dude Descending the Stairs, will be writer and artist Anthony Ausgang accompanied by ambient soundscapes from Victor Charles Balogh and Jim Within

Kat Genikov b. 1987 is a multi-media artist whose work combines traditional media such as painting with sound, performance and other time-based disciplines. Her work uses a personal poetic-image making process that involves collage and drawing and musical composition. It concerns itself with phenomenology of trance states and their function within a collision of cultural, political and personal realities. http://katherinegenikov.com/

Svetlana Durel, b.1989, is a Russian-American artist who grew up in St Petersburg before moving to Los Angeles as a teenager where she currently lives and works. Durel primarily work in oil and mixed media, skirting the line between the figurative and the entropic. She received her BFA at Otis and studied at the Ecole des Beaux Artes in Paris. http://svetlanadurel.com/ 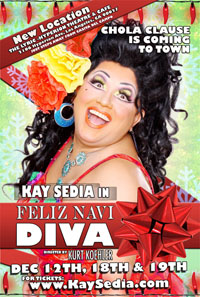 Zip up your holidays with a VERY differet Holiay show Feliz Navi-Diva at the Lyric Hyperion Theater.

Drag queen Kay Sedia was born in Tijuana, the youngese of and is a member of the comedy trio Chico’s Angels.

CALENTURA is BACK! After an amazing 1 year anniversary, Fania Records, Subsuelo and Late Night Laggers are back at Los Globos and things will be hot, sweaty, and wild! Join us as we kick of our 2nd year with lots of Latin rythms, global beats, deep bass and jungle creatures! 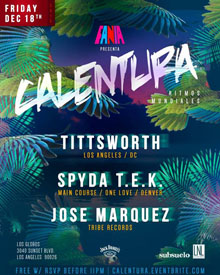 Special Guests: TITTSWORTH (LA / DC) – DJ, producer, club owner, and record label owner, Tittsworth has worked with the likes of Q-Tip, Theophilus London, Pitbull, Kid Sister and more. He has been featured on MTV, VIBE, Pitchfork, XLR8R, and countless other outlets. With his remixes on Radio One and in influential Top 10 lists, his 2008 debut album “12 Steps” was released on Plant Music and critical acclaimed by Billboard, DJ Mag, and URB. In 2006 Tittsworth established his own label with DJ Ayres: T&A Records. In 2010 he became a co-owner of U Street Music Hall, a world-class night club with an ever-present line for sold-out shows.

Spyda.T.E.K. (Denver) [Main Course/One Love] – DJ, producer, remixer and on-Air Mixer, SpydaT.E.K. is a all-around bass music chameleon. His style ranges from trap-influenced 808 slappers to soulful and groovy dance cuts and latin-fused club bangers. With his productions being supported by the likes of Diplo & Skrillex, his work has become a recognizable sound in the festival circuit.

Jose Marquez (Tribe Records) – Los Angeles DJ/Producer Jose Marquez’ musical influence is a stable diet of Latin and World Music. His many original priductions and DJ mixes fuse his love of world rhythms with the dance floor. First bursting onto the scene in 2010 Jose has seceral remixes & edits under his belt for artists such as Celia Cruz, Nina Simone, Oumou Sangare for renowned Housemusic labels such as Tribe Records, Djoon Experience, Vega Records and many more. He continues to travel the globe performing at major clubs uniting nations on the dance floor with his signature sound.

Photography by FarahStop Visuals by Juxli; Drink specials with Jack Daniel’s all night