Frieze Los Angeles returns to the Paramount Pictures Studios on February 14 – 16, 2020 at Paramount Pictures Studios, the fair will bring together more than 70 of the most eminent galleries from Los Angeles, the United States and around the world, as well as a program of on-site artist commissions and events extending throughout the city. Global lead partner Deutsche Bank continues to support Frieze Los Angeles for the second consecutive year.

The iconic setting of venue partner Paramount Pictures Studios will once again provide its world-famous backlot set that emulates the streets and architecture of cities such as New York and Chicago. Following the success of the 2019 inaugural edition, Frieze Los Angeles 2020 welcomes returning galleries, as well as first-time participants. This art fair was included in my wrap-up review of the inaugural Art Week Los Angeles which took place last year. CLICK HERE TO READ.

Bettina Korek (Executive Director, Frieze Los Angeles) states, “The debut of Frieze Los Angeles catalyzed global interest in Los Angeles’ dynamic art scene and established the fair as having a distinct commitment to locality.” Victoria Siddall (Global Director, Frieze) adds, “We will welcome major new galleries to the fair, from Brussels to Cape Town, Mexico City to New York, as well as a host of exceptional curators creating groundbreaking programming, The fair will be at the heart of Frieze Week, an exciting program of exhibitions and events that spans the whole city and celebrates L.A.’s extraordinary cultural scene.” 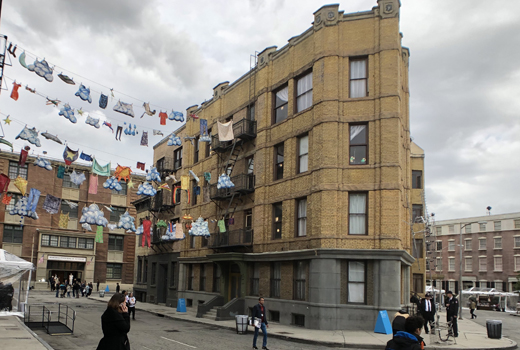 Frieze Projects, the program of performance, sculpture, and installations staged within the Paramount Pictures Studios backlot set, will return, this year co-curated by Rita Gonzalez and Pilar Tompkins-Rivas (Director, Vincent Price Art Museum). Venus Lau (Artistic Director, K11 Art Foundation) will curate the Frieze Film program, which will feature artists whose films are being shown in the Paramount Theatre. Another highlight of the program will be the Deutsche Bank Frieze Los Angeles Film Award, realized in partnership with the award-winning, non-profit film academy Ghetto Film School (GFS) providing a platform to support the grassroots film community in Los Angeles. Coinciding with Frieze Los Angeles, an expanded Frieze Week program of exhibitions and events across the city will begin on Monday, February 10 and run throughout the fair dates. Frieze Week will encompass a broad spectrum of programming at galleries, museums, civic organizations, and other artist-driven spaces, celebrating and showcasing the many communities which make up L.A.’s dynamic art landscape.

Tickets are limited and only available online ONLY – Click Here for more info/times and to purchase your tickets. Be aware tickets will NOT be available at the door. Buy now to avoid disappointment! CLICK Here for parking info.