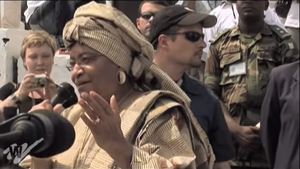 After surviving a 14-year civil war and a government riddled with corruption, Liberia is ready for change. On January 16, 2006, Ellen Johnson-Sirleaf was inaugurated President—the first freely elected female head of state in Africa. Sirleaf faces the daunting task of lifting her country from debt and devastation. She turns to a remarkable team of women, appointing them in positions such as police chief, finance minister, minister of justice, commerce minister and minister of gender. With exclusive access, directors Siatta Scott Johnson and Daniel Junge follow these “Iron Ladies” behind the scenes during their critical first year in office as they tackle indolent bureaucracy, black markets and the omnipresent threat of violent riots. Highlighting the challenges that African countries currently face, this film provides an uplifting example of women who have become the backbone of change.

Victims and perpetrators of Sierra L 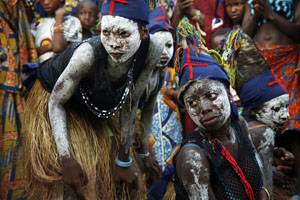 eone’s brutal civil war come together for the first time in an unprecedented program of tradition-based truth-telling and forgiveness ceremonies.

Through reviving their ancient practice of fambul tok (family talk), Sierra Leoneans are building sustainable peace at the grass-roots level—succeeding where the international community’s post-conflict efforts failed. Filled with lessons for the West, this film explores the depths of a culture that believes that true justice lies in redemption and healing for individuals—and that forgiveness is the surest path to restoring dignity and building strong communities. The screening will be followed by a talk with Director Sara Terry. 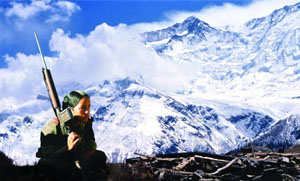 Filmed over three years during the most historic and pivotal time in Nepal’s modern history, The Sari Soldiers is an extraordinary story of six women’s courageous efforts to shape Nepal’s future in the midst of an escalating civil war against Maoist insurgents, and the King’s crackdown on civil liberties.

Above: Still from The Sari Soldiers