nner of the 2009 and 2011 Downbeat Critics Poll for Baritone Saxophone! Winner of the 2011 Jazz Times Readers and Critics Polls for Baritone Saxophonist of the Year! Winner of the 2009 and 2010 Jazz Journalist Award for baritone saxophonist of the year. Baritone saxophonist Gary Smulyan was born April 4, 1956, in Bethpage, New York. The gifted multi-instrumentalist started his music career by first learning alto saxophone during his teenage years on Long Island. Today he is critically acclaimed across-the-board and recognized as the major voice on the baritone saxophone. His playing is marked by an aggressive rhythmic sense, an intelligent and creative harmonic approach — and
perhaps most importantly – a strong and incisive wit.”

Well, I certainly am a fan! Apparently I’m not alone on this fact! He plays with the likes of Joe Lovano, Dave Holland, George Coleman, Christian McBride… the list really does go on and on! 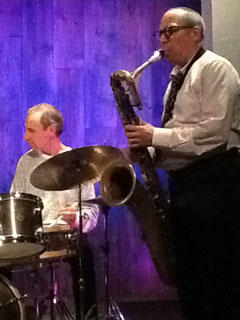 evening Gary played with Darak Oles on bass and Joe LaBarbara on drums. A Tad Dameron tune started off the evening. The space of the stage at The Blue Whale physically seemed so empty… Perfect for this trio of bari sax, bass and drums. La Barbara started off the song with a solo, blending into a Latin groove.

In the front stood a short man, eyes closed, dressed in a long suit jacket, big bold tie, round black glasses… the Bari almost the same size as him. The song morphed into the changes to All The Things You Are. A very intense version, a moving tempo, changing at some forgotten point into hard swing, each player playing out full steam. What big music for a small group!

He stopped playing at what seemed like the perfect point, and dynamics came way down for Darek’s solo. Joe and Gary filling in unobvious bits here and there… Then followed by a trading of fours with Joe, that was free and in the moment. Ah… the last A section slid back into a burning Latin groove. 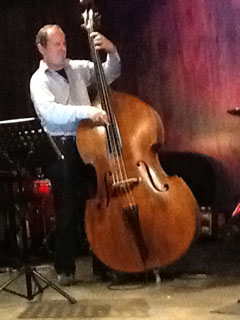 all… the space that was created was like the second song they played…a Monk tune. Crazy, toe tapping… in the oddest way! I didn’t miss a chord instrument at all. It was totally fulfilling, each singular musician with a voice…musically hanging out and communicating. This is really what jazz is supposed to be like. Just a big ole groove, having fun!

And isn’t the sound of a Bari sax just so great! Played well, it’s just so satisfying to the body and the soul!

After all this burning, into a warm and wonderful “Autumn in NY”. The Blue Whale is the best place to hear this kind of thing… it’s so intimate, it’s like a living room concert. Aesthetically pleasing, comfortable, warm people appreciating the art form.

Gary is a great player. Chops do not get in the way of making the music, and he does both really well. What great great lines he plays… you really can hear all of his ideas and he has a beautiful tone as well. Of course, if you know the other two guys, you know that the same is true of them, that’s why this is a great trio! And this is bebop, freebop, modern…whatever you call it, it’s good! 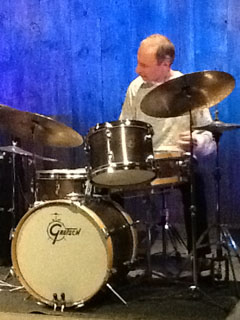 Joe is such an incredibly elegant player. He is so fluid and tasteful. Easy playing, easy to watch, completely flowing. And Darek has become one of the main jazz players that plays with quality jazz musicians, around the world…which is easy to see why. He’s right in the moment, his commitment is obvious, he’s a melodic bassist… he also adds a driving force to the music as well.

The minute waltz (which I thought might be e break tune!)wow, was a quick jazz waltz tempo…beautiful! Great soloing, on everybody’s part. It was such a surprise to hear it, not only for me, but for the crowd,as evident by the gasps and giggles that suddenly popped out!

The last song of the first set burst into a burning tempo on Airegin, where once again we were allowed into the magical world where the three world- class musicians met each other, recognized one another, and played joyously together! How lucky are we?! It doesn’t get much better than this, as they say! Thanks, Gary Smulyan, for stopping in L.A. on the way through, on your tour! And thanks to the Blue Whale, for always booking the best musicians the world has to offer!