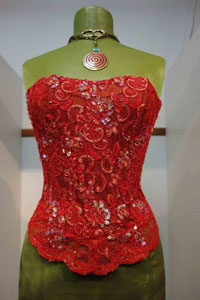 Fashion is an art all its own. For designer Gigi Clark, fashion has always been a part of her life. A creative person from the start…Clark was making her own tiny fashions for her dolls when she was just twelve years old.

A true entrepreneur, she started sharing her doll clothes and designs with her other young friends, via barter and eventually selling them.

An exceptional designer, Gigi Clark creates original couture designs for today’s modern woman. Like most creative people, inspiration comes in many ways. “I design with my emotions and transform this into function,” said Clark. “It could come from a wave in the ocean or a trip to the museum.”

Clark has been asked to create made to order fashions. Hollywood celebrities such as Martin Scorsese’s daughter, Dominica Scorsese, and her mother Julia Cameron (Author of the Artist’s Way) are both clients. 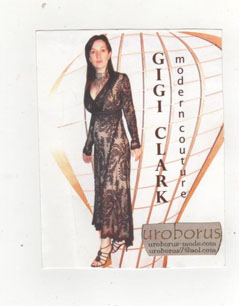 wo years ago, Clark designed a black lace stretch dress with a nude silk lining for the well-known director’s daughter to wear at the Golden Globe event.

Her second love, next to fashion design…is window dressing. In fact, her shop Uroborus-Mode has won the first prize for “Best” window at the Main Street Holiday Event three times.

She started designing windows when she was around nineteen years old to make some extra money. From there it took off…she started getting calls to design windows for local businesses.

For more info about Gigi Clark and her designs, see FB Page.