Skip to content
On View Now….the Work of Dado Schapira, Featured at the West Hollywood Library 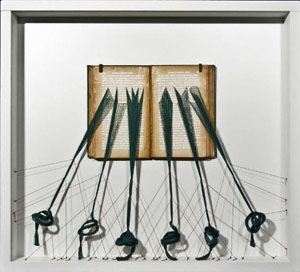 Dado Schapira, an Italian artist, has developed this site-specific project for the City of West Hollywood through its Arts and Cultural Affairs Commission. For this project at the West Hollywood Library he has chosen books, and colored threads of silk and cotton as artistic media to express the concept of a global, universal culture carried by thin links among Nations.

“The idea is to use a book as physical support to enclose our history and our past on pages…A book tells the story, the memory of the world, of our lives. On its pages we find, immortalized and intertwined, our emotions, dreams, wishes, passions………..” (Schapira)

Letters that form words; words that form sentences and then passages, chapters and finally books in a circular process of knowledge; themes like flags, peoples, religions, sex, sentiments, sensations, all run along threads.

“When ideas and thoughts have taken form and the threads are ready to be intertwined, “woven”, the work truly takes form; fantasy and imagination “fly high” to realize themselves in a fleeting moment, this is definitely the most fascinating moment ……….” (Schapira) 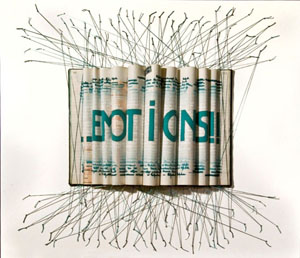 Schapira has captured in his work a real spirit and function of the library: the one to spread Culture and Knowledge among People and Nations without differences of race, sex, religion, and faith.

This is a Universal message that the artist would like to share with the entire City of West Hollywood and beyond by inviting people to join this moment of Art at the West Hollywood Library.