CB1Gallery is a cavernous but inviting gallery space located at 1923 S. Santa Fe Ave. Currently, two shows are on exhibit. “Tomorrowland” is a curation of oddities, such as sculpture, conceptual art (including a found object), and paintings that forces the mind to contemplate what the future holds – bizarrely shaped sculptures using wire and plaster personify perhaps grotesque twists of fate. A shiny round yellow plastic mobile hangs from the ceiling bringing memories of yesteryear nostalgia back to the viewer of extinct animals, while a small token of bird feathers cling to the bottom of it. 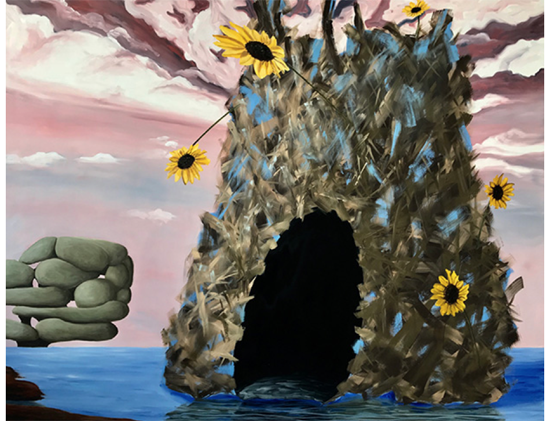 Whimsical and thought-provoking mind-melds go hand-in-hand. Including the exploration of exquisitely lacquered cabinets in an eerie ghost color that have compartments that go nowhere or mean nothing, or none at all. Even the large scale scene of a tree on a city street looks otherworldly with the glow of lighted columns beneath it. Or, take a trip into a world of water and what our future homes could look like as mesh pods float on the sea under a hazy pink sky in Lisa Adam’s painting, Just Enough to Win. A trip into a Twilight Zone episode, indeed.

The other side of the gallery features the first solo exhibition of the Korean artist, Jungwha Hong, called “Veiled.” 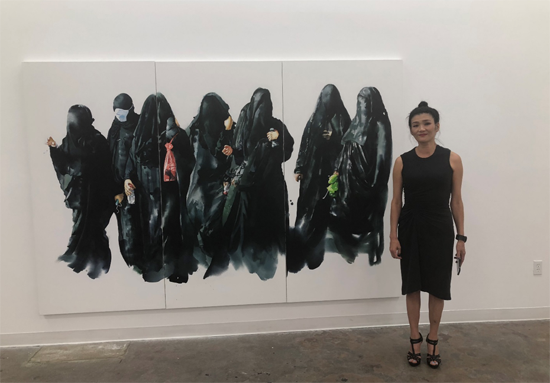 Jungwha Hong with her work; photo by author

Her works center on the exploration of the repression of women as experienced within her own culture, from food rituals for the ancestors where women cook the food but never present it with the men, to the cloaked clothing Korean women used to wear to conceal their faces and keep them homebound. Much wider, she explores the burqa as a symbol and metaphor for the complex lives of women in Muslim cultures. She channels the sexism she experiences in her own culture to a wider world stage and most poignant symbol that hides a woman – the burqa. The burqa is a head-to-toe garment that not only covers the body, but also the face. Women who wear the burqa remain closed off and hidden from the world dominated by the patriarchal society they live in. 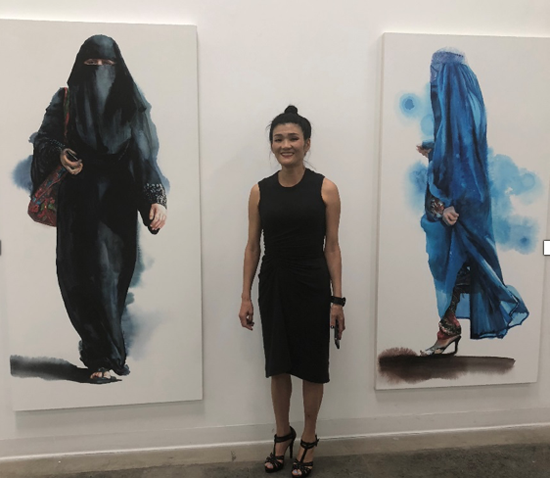 Jungwha Hong with her work; photo by author

What is hidden behind the clothing is the women’s face, her body, and to me, most importantly, her voice. She is meant to be part of the background, unseen, and invisible. Yet, in Hong’s paintings the women in burqas are brought front and center. The women are depicted in common scenes of domestic and modern life. They are life-size full scale at 72 inches in height for each of the pieces. The women are painted with washed down acrylics that lends a light and delicate quality to the painting, yet with clear and confident brush strokes that give the work a certain kind of gravitas and quiet strength at the same time. 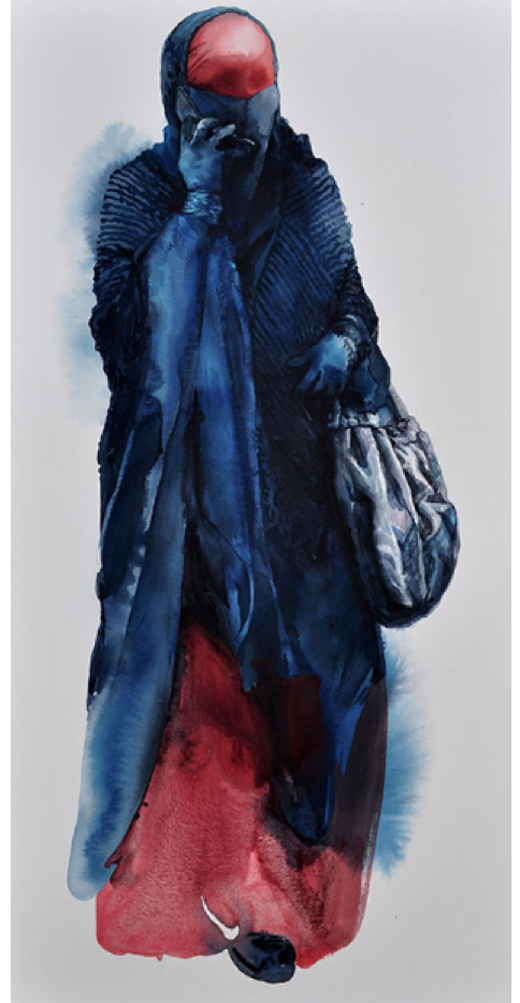 Witnessing the women in burqas with the clear trappings of modern times intertwined with the ancient and draconian burqa is striking. They are like women who are about to burst into the 21st century and throw off what masks them. There is the woman figure standing with a cell phone to her covered head, while the Nike logo shows prominently on the shoes that protrude from beneath her floor length robe. There is another woman (my favorite) who stands direct and facing forward, her eyes staring straight at the viewer with a confident modern air of a Western business woman, clutching a designer purse and a cell phone.

Meanwhile she is head-to-toe in black fabric. She has strength and conviction behind those eyes. Some may consider that these women in burqas are proud emblems of their Islamic culture. Others look at them and condemn the concepts of patriarchal control and domination that denies women their right to choose what they wear, to be seen, and by extension to be heard. Hong’s paintings are clearly making a point to make these women be seen.

Yet, they also represent the complex dynamics of the beauty of women in flowing robes. One shows a woman with beautiful floral silk pants underneath wearing slinky, glittering high heels. There is no denying the beauty of women, their form, and their essence even when attempting to cover them up. This is the thing that plays back and forth in Hong’s paintings. This dynamic between hiding the woman’s power and self, while also celebrating their shape and form even while hidden and mysterious behind the long robes/dress. While, also at the same time the burqa keeps them safe from the assault of the male gaze. As Hong says herself, in a way her works on this subject explore what she calls “a beautifully manipulated custom.” 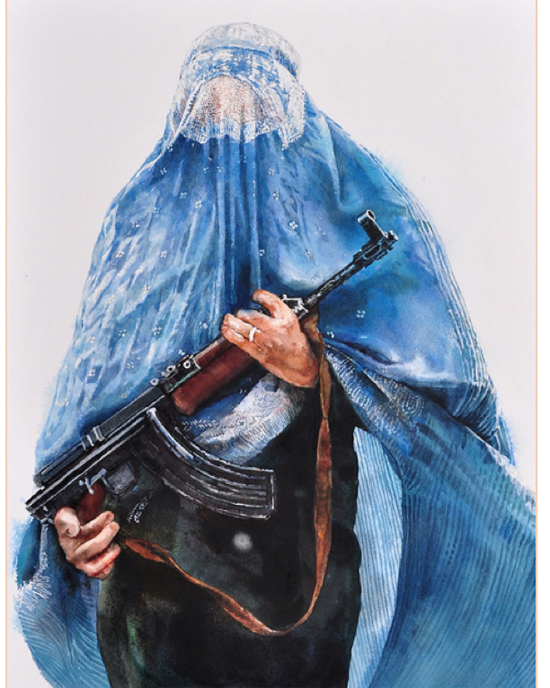 What I walked away with was it must be complicated to be a woman in a Muslim world. She is hidden – her face, her thoughts, her body. She is background to a male dominated world but in these paintings Hong forces the viewer to witness that world. The stark and minimal backgrounds also force narrowing of the focus on the women. I felt compelled to witness them in their silent yet strength in intimate poses with child. And, I felt compelled to hear them when revealing their most secret thoughts, hopes, and revolutionary ideas like in the piece Fighting for Your Burqa where the woman wears her burqa, while simultaneously holds an AK-47 machine gun in her hands. It is this image that leaves me with the most haunting feelings and premonition of where things may be going in the future.