Ok time for the Weekend Update…and all Mama’s got to say is whew!!! It only gets busier… 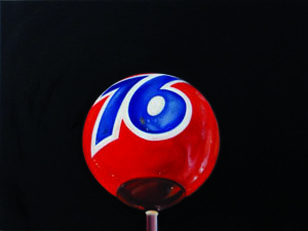 k of David Lynch…also Miracle Mile offers some notable ones.

Check out my Artillery Magazine Article featuring an interview with the artist. The exhibition was extended through November 23rd.

Our Pick of the Week takes place at Corey Helford Gallery. This Saturday, November 23rd, “Pink Elephants” opens featuring the work of SHAG. 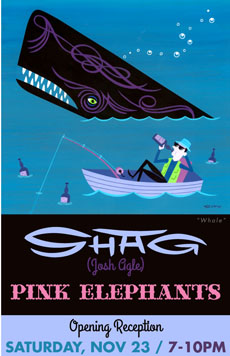 solutely love this artist’s work. It brings me back to my childhood. It’s playful with a splash of retro absurdity, tipping it’s hat to the “Mad Men” spiced era and what appeared to be a more naive time.

Here’s what the gallery has to say…

The term “Pink Elephant” was coined by Jack London in 1913 to describe visions and hallucinations brought on by excessive alcohol consumption. Josh Agle’s (aka Shag) work has always celebrated and advocated the drinking of cocktails and liquor and his own lifestyle reflected the paintings he created. Agle explains, “I used alcohol as an aid to create art and as a means to escape the expanding responsibilities of a successful art career. I pursued the variations and varieties of drink like the most dedicated stamp collector or fisherman might devote himself to his hobby

Because I was a well-known artist well known for the glorification of cocktails, I drank for free in many bars and restaurants. Painting became something I did between binges.The benders expanded. At some point, the end of one bout of drinking met the beginning of the next. I stopped drinking the day I realized I hadn’t lifted a paint brush in a week. 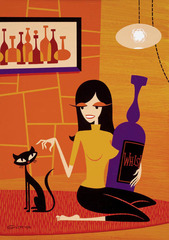 my hobby on hold, cut myself off, yelled “last call,” and haven’t had a drop in months. I’m not declaring I’ll never drink again – I cherish my rum too much. But I will give it a long vacation. I do miss it, like one misses a close friend who’s moved to London. In the meantime, I can make paintings about drinking – paintings that embellish, rebuke, condemn, and extol it”. Shag’s current exhibition “Pink Elephants” is a collection of those paintings.

Josh Agle is a painter and designer from Los Angeles who is probably better known by the name he signs on his paintings, “Shag.” Agle has spent the last decade creating a body of work based on his idiomatic aesthetic preference, a world of mid-20th century modern architecture and design, populated by hedonists, supplicants, and indifferent women.

The paintings themselves celebrate consumerism and consumption on vividly colored, sharply rendered panels where the characters drink, smoke and eat in lavish, stylish surroundings. But Agle sees the visuals of his work as window-dressing or stage scenery. He’s more concerned with the narrative of the art. “Most of my paintings are set in the middle of a story or situation — characters are interacting and reacting to each other and to outside events.” Agle doesn’t offer too many clues about the stories, preferring that the viewer create his or her own narratives to fit the situations. 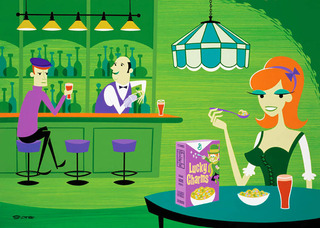