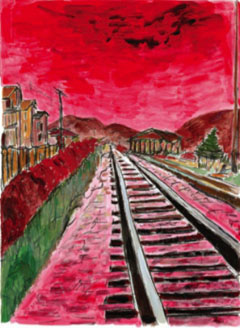 This exhibition, which also includes three examples of Dylan’s originals, is a comprehensive and authoritative collection of Bob Dylan’s art. While Dylan has been a committed visual artist for more than five decades, The Drawn Blank Series casts a vibrant new light on the singular creativity of one of the world’s most important and influential cultural figures.

Based on drawings and sketches made by Dylan while on the road during the period of 1989 through 1992, the exclusive and limited edition prints in The Drawn Blank Series visually echo the stylistic hallmarks of Dylan’s prose, poetry and music.

Just as Dylan’s songs are constantly reinvigorated and rediscovered through his live performances, so these artworks revisit images and scenes which were captured in all their immediacy by the artist. Dylan chronicled his life on the road: in between gigs, on trains, in cafés, backstage. The drawings trace his everyday observations, his thought process and his vision.The Drawn Blank Series has resulted in a collection which is at once a significant independent achievement and a fascinating extrapolation of themes and images which haunt his music. The exhibition is on view through January 3, 2015.

*A portion of the exhibition opening night proceeds on November 6, 2014 will benefit P.S. ARTS, a 501 (c) 3 non-profit whose mission is to improve the lives of children by providing arts education to underserved public schools and communities. For more information about P.S. Arts visit the website. 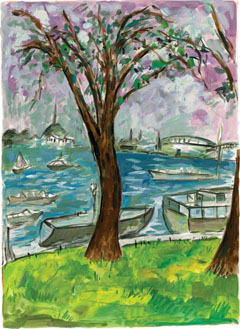 About Andrew Weiss Gallery
Launching its newest location in Santa Monica, CA in November 2014, Andrew Weiss Gallery has specialized for over 40 years in the works of Picasso, Chagall, Miro, and Dali. The Andrew Weiss Gallery offers an extensive collection of original paintings, drawings, prints, and ceramics to its exclusive international private clientele, and galleries worldwide. Located in Santa Monica, California, this gallery is the latest of four previous galleries owned by Weiss in major cities nationally. The gallery also specializes in Hollywood fine photography, featuring rare photographs from the 1930’s to present as well as the world’s largest archive of Marilyn Monroe original photographs. A third generation art dealer, Andrew Weiss is a founding member of the IFAA (International Fine Art Appraisers) and is well renowned worldwide for his expertise.

YOU MUST RSVP for this EVENT – RSVP to art@trentpr.com