New York Water is currently having a successful run at the Pico Playhouse. A comedy written by Sam Bobrick and directed by Howard Teichman, is produced by Bill Froggatt and Howard Teichman for West Coast Jewish Theatre (Produced by special arrangement with Samuel French, Inc.). The play stars Ross Benjamin and Bridget Flanery. 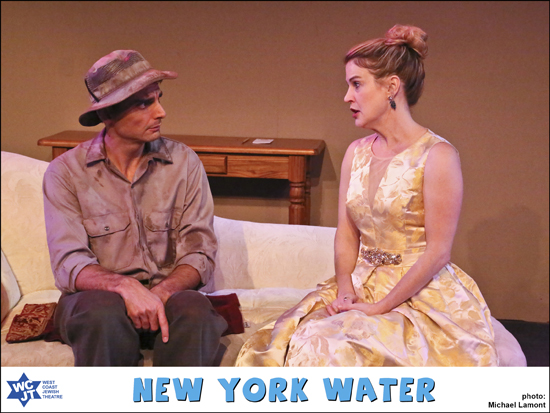 Linda and Albert, both in their mid-thirties, meet in New York through a Personals ad. They connect. They feel stifled by their native big city and decide to move elsewhere. Their American odyssey will take them first to the Midwest and then to Hollywood. Linda ascends to dizzying heights while Albert remains steeped in mediocrity. After Hollywood, where do you go next?……The title? It refers to the quality of New York tap water for drinking: Delicious, if you can get past the fact that rusty pipes sometimes impart to it an odd hue.

This is all funny business, and the playwright, Sam Bobrick, knows comedy. His thirty-two plays include Norman, Is That You?, Murder at the Howard Johnson’s, Hamlet II (Better Than the Original), and more. He also created the classic TV series Saved by the Bell.

Director Howard Teichman is the Artistic Director of West Coast Jewish Theatre and has cast Ross Benjamin as Albert along with Bridget Flanery as Linda.