Skip to content
Threepenny Opera Runs Through May 9, at A Noise Within!

A Noise Within (ANW), the acclaimed cla

The Threepenny Opera debuted in Berlin in 1928. Threepenny is nothing short of a groundbreaking work of what is now termed Brechtian Theatre, in which the full use of theatricality is on display and the fourth wall is broken; the audience is aware they are watching a play, a reaction to a previous, more naturalistic approaches to stage works. When first produced, the musical challenged the audience’s notions of how songs could be used to tell a story, and the characters’ ostensible amorality was thought unworthy of expression in song. A Noise Within last produced The Threepenny Opera in 1997.

An adaptation of The Beggar’s Opera by John Gay, Threepenny is a forerunner of modern musical theatre that follows the exploits of Macheath, Victorian London’s most notorious criminal, surrounded by a stage full of rogues, foisting a radical new brand of theatre with music (in America Show Boat would have just premiered, and Oklahoma! would still be 15 years away) on audiences. Threepenny was not just rebellious in form, but also in content highlighting the failure of capitalism and celebrating socialism.

The plot begins as Macheath (Mack), the nastiest criminal in London, marries Polly Peachum, the daughter of Peachum, the boss of London’s beggars, who gets a cut of their take for training them. Mack for his part has eluded jail due to his longtime friendship with “Tiger” Brown, the chief of police, whose daughter also has designs on Mack. A visit to a brothel, Peachum unleashing his beggars to ruin Queen Victoria’s coronation, Mack arrested, put in jail and up for execution, and a surprise ending all figure into the story. 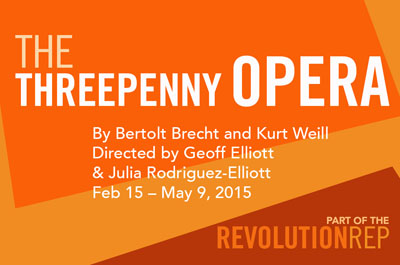 Pay What You Can Performance: Pay What You Can tickets (first Thursday preview) go on sale at the box office window the day of the performance, starting at 2pm, and are sold on a cash-only basis based on availability; limit of two tickets per person.