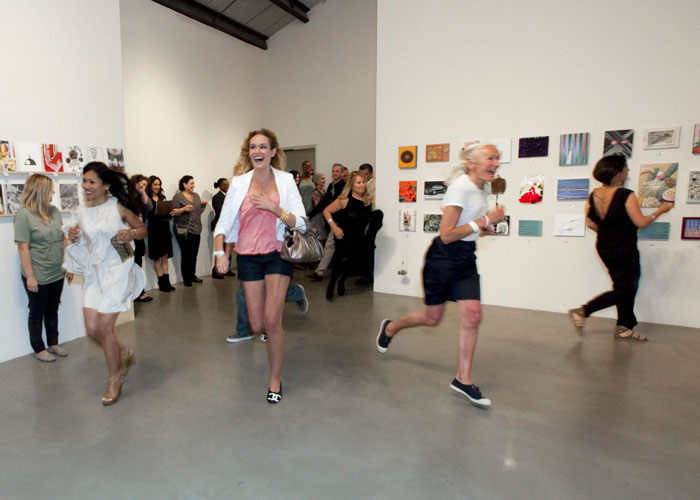 e race begins with the phrase, “Trust Your Instincts.” This is the advice offered by executive director of the Santa Monica Museum of Art, Elsa Longhauser, on how to choose art at the INCOGNITO event.

For the past 8 years, the Santa Monica Museum of Art’s annual event has drawn art lovers to Bergamot Station. Each year, this unusual high-energy event offers original artworks for sale at incredible prices. Going with your gut has led many to victory as each work is signed on the back and the artists’ identities are revealed only after purchase.

(2012 PRECOGNITO, gala dinner, left) Saturday, March 17th from 7:00 p.m. to 10:00 p.m., more than 650 artworks will be available by 500-plus leading, mid-career and emerging contemporary artists. As always, every 8″ x 10″ original will cost the same low price. For a mere $350.00 plus tax, one can walk away with a work of art by renowned artists such as John Baldessari, Mark Bradford, Marco Brambilla, Judy Chicago, Kim McCarty, Yoko Ono, Raymond Pettibon, Ed Ruscha, Betye Saar, Mickalene Thomas, William Wegman, and many more. 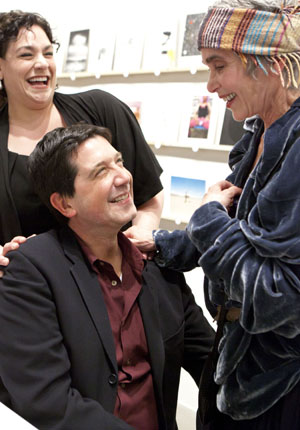 a Longhauser (see photo to right; she is on right, with Andrew Stearn and Lisa Melandri) talks about how INCOGNITO came about, “We came up with the idea based on a similar concept at the Royal College of Art in London. They do a postcard exhibition with artists signing their work on the reverse, to keep their identity secret until after purchase. We thought it was an interesting way to fundraise while respecting the uniqueness of the museum. So we started talking about it and came up with the name INCOGNITO, and the idea took off from there.”

Each year on the day of the big event, a line begins to form by noon outside SMMoA. Longhauser explains, “It is a mad dash, a major athletic tournament. Many people are very serious about it; they’re ready for a sprint, dressed in their sneakers.” 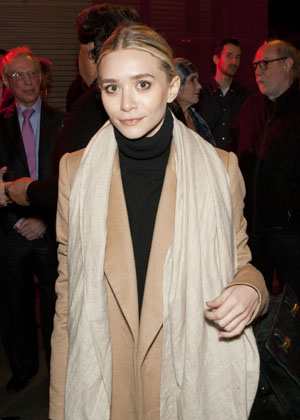 (Ashley Olsen at this year’s Gala Left)This year, for the first time, the Museum held a preview gala, PRECOGNITO, in the Museum’s Main Gallery. The Gala will included a dinner honoring philanthropist and collector Eileen Harris Norton, artist Paul McCarthy, and founder of the Bergamot Station Art Center, Wayne Blank. It was an incredible event with amazing food, people and art.

Hope you snagged some great art….who knows you could have grabbed a very valuable piece.