Skip to content
On View Now: the Art of Gregg Chadwick Featured at the Sandra Lee Gallery in San Francisco! 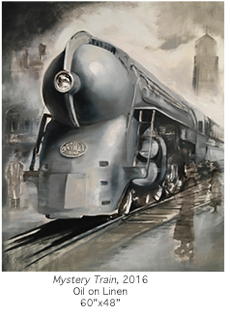 I grew up with the rails of America in my blood. My grandfather Arthur Desch, worked as a fireman stoking coal in steam engines before he advanced to train engineer on the Jersey Central Line. Parties and family gatherings in my grandparent’s home brought the rhythms of the rails home. In their clean but Jersey dank basement, the sounds of railroad workers echoed in the music my aunts and cousins played in the shadows of the train lines outside. From Junior Parker, to Elvis Presley, to Bob Dylan and Johnny Cash, to The Band, to Bruce Springsteen, to Michael McDermott, to arts writer Greil Marcus, to film writer and director Jim Jarmusch, the enduring mythos of America and its legacy has been wrapped in the blues notes of the song Mystery Train. Recently, while flipping through my mom’s carefully tended scrapbook, I found black and white memories of my family’s yearnings, struggles, and triumphs.  Whispers of cellar mysteries found their way back into my thoughts and dreams. Today as I paint, a current song by Gary Clark Jr., When My Train Pulls In, propels me back into memories of earlier sounds of passion and propulsion. My current series of paintings, Mystery Train, is steeped in these powerful echoes of those machine days.

Sourced from vintage railway publicity images, news organization publications, family photographs, and WPA materials found in the resources of the Library of Congress, my paintings explore the legacy of transportation and travel.  Rendered in almost sumi-e like shades of black and white, with touches of amber and sepia, two iconic trains from the streamlined modernist age in America loom large in my artistic explorations – the Empire State Express and the 20th Century Limited. These late 1930’s early 1940’s trains from the New York Central Railroad evoke a propulsive spirit of inclusion and cooperation that inspires me daily. 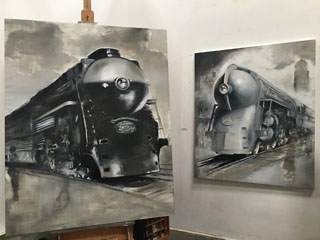 My parents moved to Paris, France as a young couple and their global aspirations are reflected in other paintings in my exhibition Mystery Train. These artworks consider the ephemeral nature of our lives as well as the aspirations we carry in our dreams. Each artwork begins with a remembered, researched, or observed moment that is sketched loosely onto the surface of the painting with fluid oil colors. Layers of paint overlap and merge with earlier painting sessions to create a sense of shifting time. Surfaces are scraped down, over painted, and layered with transparent pigments. Opaque swaths of color are brushed into the wet surface, leaving remnants of past figures and locations, while memories and future visions surge to the surface and overwrite the image. Figures appear and then often vanish into the mix. Themes may shift during the painting process and locations may change much as our thoughts can move quickly from one memory to another as we travel down the tracks of our journeys.  In this fashion each of my paintings is a passport of memory. – Gregg Chadwick, January 2016