Upper West Restaurant presents its newest exhibition….be sure to stop in. “Cinema of Time” features the brilliant art of Gregg Chadwick. I happen to be a huge fan of Gregg’s work. Just about eighteen of his large scale works will be on view. Many as large as seven feet by seven feet. 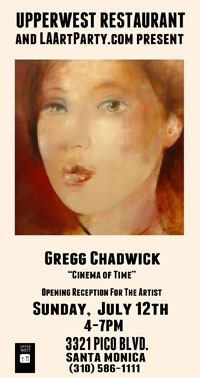 Unlike most gallery shows, this exhibition will include paintings from various series illuminating the depth of Chadwick’s work. He explains, “The Japanese themed images are from a series entitled “Thirteen Geisha” that reflects a wondrous time in Kyoto where the streets were filled with geisha, which in Japanese means arts-person (gei-sha).”

“Scarlet Shadow” (on Flyer) was originally painted for his exhibition “Theater of Memory” and debuted at the Monterey Peninsula College Art Gallery.

Also on display are paintings from two recent solo shows at the Sandra Lee Gallery in San Francisco. The exhibitions were titled “The Time Between” and “Revenant.” Chadwick continued, “New paintings  (2015) are also included in the exhibition and reflect a consolation of the previous shows into a larger body of work entitled ‘Cinema of Time.'”

Like many of us…..Gregg enjoys both the food and the amibiance of this popular eatery. “Upper West is a fitting venue for an exhibition of these paintings. Situated in a vibrant part of Santa Monica, close to film studios and production companies, the restaurant beckons to those looking for something more out of life. There is magic in the night.” 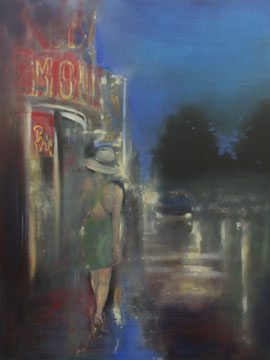 Chadwick said he finds inspiration from artists such as William Kentridge, Hung Liu, and Jonathon Keats. “William Kentridge’s artwork is extraordinary and I deeply appreciate his grappling with political and social themes in his wonderfully messy, fluid, yet still precisely right style. explained Chadwick. “Kentridge’s seemingly simple use of film and drawing is quite profound. Hung Liu’s paintings provide an important arena in which to consider immigration, emigration and the nature of worth and memory. Like Kentridge’s, her art is deep in social and political resonance and moves me deeply. He has had a personal relationship with artist Jonathon Keats for a number of years. “Jonathon’s deeply serious and also profoundly funny artwork is always an inspiration.”

On view through September.

For more information about Gregg Chadwick, visit his website at http://www.greggchadwick.com/