dnj Gallery celebrates new exhibitions…”Radiate” by Karen Amy Finkel Fishof opens in the Main Gallery. The exhibition will feature a collection of photograms – camera-less images that are made by placing objects on sensitized paper, and exposing all to light. Finkel Fishof attended Syracuse University where she received a BFA in painting. She studied a year abroad at St. Martins School of Art, London, UK, where she was encouraged to start creating photograms. 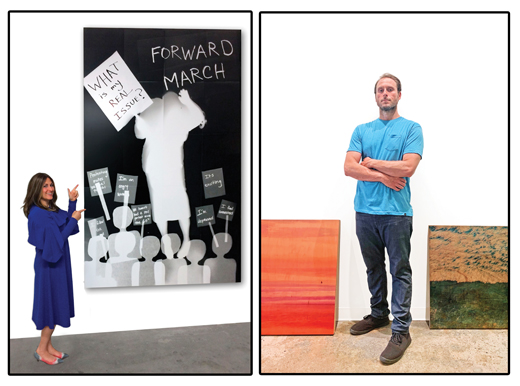 From left to right Karen Amy Finkel Fishof with work; Ryan Linke with work; photo courtesy of dnj Gallery and the artists;

In Gallery II, the photos of Ryan Linke will be on View. project entitled “Aquatic Figments,” He utilizes large-scale, wood panels merge colorful, photographic images with the pigment and texture of a base material. An example of such combination is “Infinite Horizons,” which especially illustrates the cross of colors between the image and the wood. Linke’s natural color palette is inspired by the uniqueness of our massive ocean.

The Museum of Photographic Arts (MOPA) will exhibit the photographs of Louis C. Stoumen (American, 1917-1991), in the Collection Room. In 1992, MOPA received these archives, which hold all of Stoumen’s photographs, films, publications and professional documents. An accomplished writer, photographer and filmmaker, Stoumen has published ten photography books and earned two Academy Awards for his film productions during a career that spanned more than four decades.