Skip to content
Now thru September 28, 2019: American Standard: A Story of Enough

Highways Performance Space presents American Standard: A Story of Enough, written by and starring Lilly Bright. Directed by award-winning soloist performer, Valerie Hager, American Standard will run from Thursday, September 19 through Saturday, September 28, 2019. FYI – This is a fantastic show – read the review by one of our staff writers HERE (its under the Theater drop-down on the Performance Reviews Page. 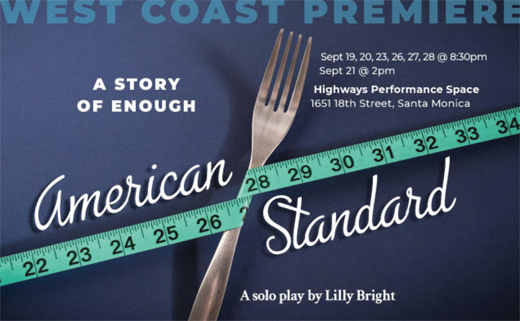 This original solo show is based on Bright’s true life story of surviving a near two-decade battle with bulimia and various “not-enough” demons, propelling her on an often comical, always poignant search for a cure, resulting in discovery of a path to imperfect wholeness and, ultimately, the courage to finally feel enough.

What initially starts out as a coping mechanism to a chaotic childhood, bulimia quickly becomes a full-blown addiction and the focal point of Bright’s life beginning in rural West Virginia. Relentless, determined, and bristling with grit, Bright searches endlessly for an end-all-be-all “cure,” from treatment centers to comical New Age practices to chance encounters with sage and colorful characters. Eventually, and under surprising circumstances, Bright triumphs in a city notorious for sun and superficiality. And finally, led by courage and heart, Lilly Bright discovers how the things she feared the most could in fact become the keys to her freedom. The freedom to finally be….enough.
Show Times: With a run-time of 80 minutes, there will be six American Standard shows to choose from between the 19th and 28th of September. See webisite for dates – all shows but one are scheduled for 8:30pm.

Tickets are $25 for general admission and $15 for students. CLICK HERE to purchase tickets. Visit the website to find out more about the show.

What: Performance, American Standard: A Story of Enough
Where: Highways Performance Space is located at the 18th Street Arts Center, 1651 18th Street, Santa Monica, CA 90404
When: See above for Show Times
Website: http://americanstandardshow.com