This Saturday, February 11th, I’ll be performing a couple of songs for a very important cause….The American Heart Association. 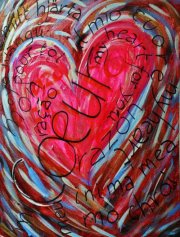 At this FREE event, (donations, will be accepted), celebrate and learn about National Heart Month on Saturday, February 11th’s Grassroots Acoustica, a music-filled fundraiser and silent auction benefiting American Heart Association, Greater Los Angeles Division. Help make a difference in the fight against the #1 and #3 killers of Americans – every 34 seconds someone dies from heart disease. 80% of these deaths are preventable! You have the power to save your heart and the heart of someone you love.

Arrive early (6-7 pm) to view and bid on some stellar silent auction items, have a toast at our VIP wine reception and then, from 7-10 pm, listen to some of the best and brightest singer/songwriters in Los Angeles.

Master of ceremonies Mark Islam welcomes return performances by Marvin Etzioni, Emily Gold and Ruby Summer who join first-time series appearances by Don Dokken, Nashville Americana artist Jon Byrd, and Venice locals Suzy Williams, Kathy Leonardo, Peter Demian as well as a Secret Valentine too popular to mention here – and with Grassroots Acoustica, you never know who that might be! There is no cover charge, but all donations support Greater Los Angeles Division of American Heart Association. Marvin Etzioni, in fact, invites you to pelt him with your wadded-up loose dollar bills & Benjamins as part of a routine he calls Throw Money At Marvin.

Held on the second Saturday of every month at Venice’s Talking Stick Coffee Lounge, Grassroots Acoustica never charges a cover & donates 100% of all voluntary contributions to local charities. All Grassroots Acoustica artists perform free of charge for the benefit of the non-profits and over 55 shows have raised $45,937 and have attracted local talent; writers of multi-platinum hits; nominees and/or winners of Grammy, Emmy, Obie, Oscar and even Peabody; ASCAP & BMI million air award recipients (including one ASCAP Song of the Century winner); national touring acts swinging through L.A.; two of Robert Altman’s gals; session player royalty certain to delight any linernotes geek.