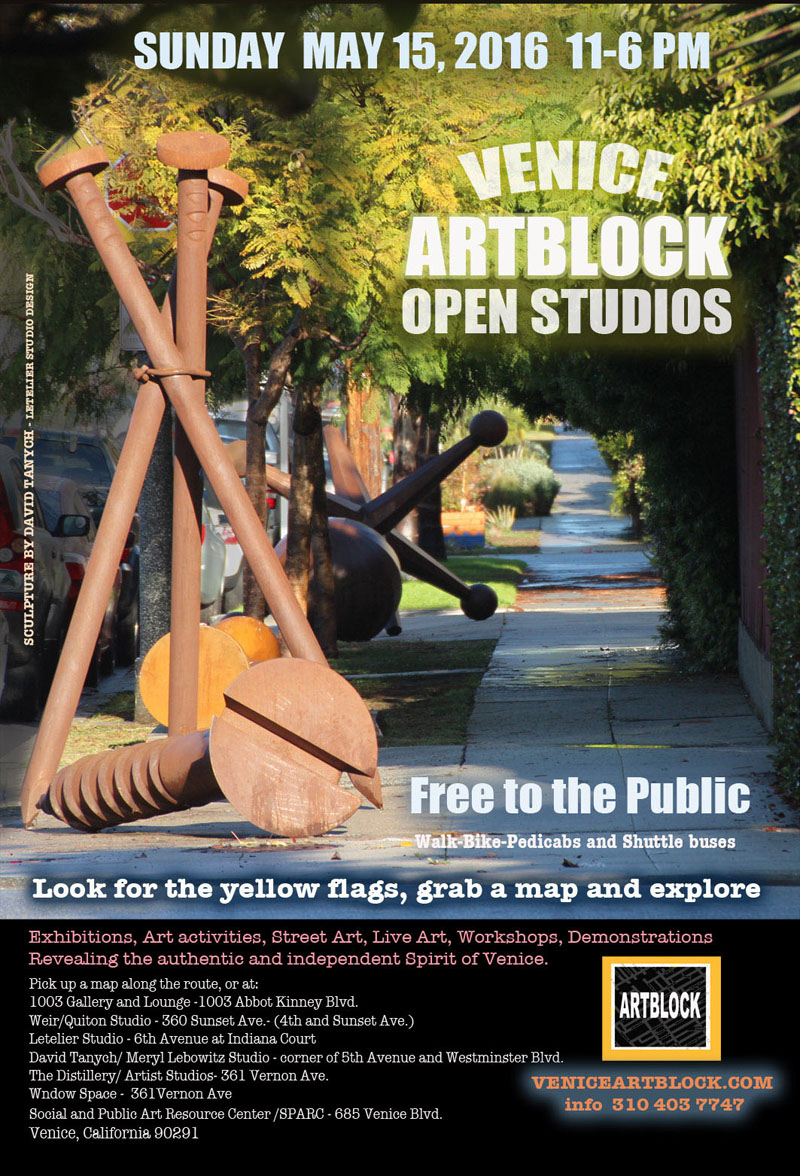 nice ARTBLOCK Open Studios once again opens its doors. Sunday, May 15. 11-6pm. This year’s event is part of Venice Art Week which also includes the Venice Art Crawl on Thursday, May 19, and the Venice Art Walk & Auctions on May 22.

ARTBLOCK will kick off the week showcasing the art of over seventy artists in over twenty-five listed venues. The artist run event takes place twice a year and is supported through the Arts Activation fund, a partnership between Mayor Garcetti’s Great Streets Initiative and the Los Angeles Department of Cultural Affairs (DCA) created to support artists in the creation of projects to enliven Los Angeles neighborhoods with inspiring ideas for public art projects and cultural events. Through DCA and the management support of Community Partners, ARTBLOCK is recognized as a project that complements the unique character of Venice.

Featuring all types of media, such as painting, photography, ceramics, glass and mixed media, attendees can expect to see scheduled and spontaneous art, music, poetry, performance, live street art, and installations in the far ranging and unique event. Venice is indeed a melting pot of amazing talent. ARTBLOCK celebrates local culture and welcomes artists that have come from all over the world to be a part of this wonderful creative community.

Artist Ivo Vergara, a Chilean American artist who has created murals and public works throughout the US and Europe, with installations for Art Basel Miami, will be creating live art for ARTBLOCK. Hagop Belian, a Syrian artist based in Venice whos’ street art has become a viral selfie site on the walls of Gjelina, will again be leaving magic on the walls of Venice. Bisco Smith, a NY graffiti based artist, now established in Venice, has just returned form a tour of South Africa. Smith will be creating one of his live calligraphic masterpieces outside Wndo Space during the event. 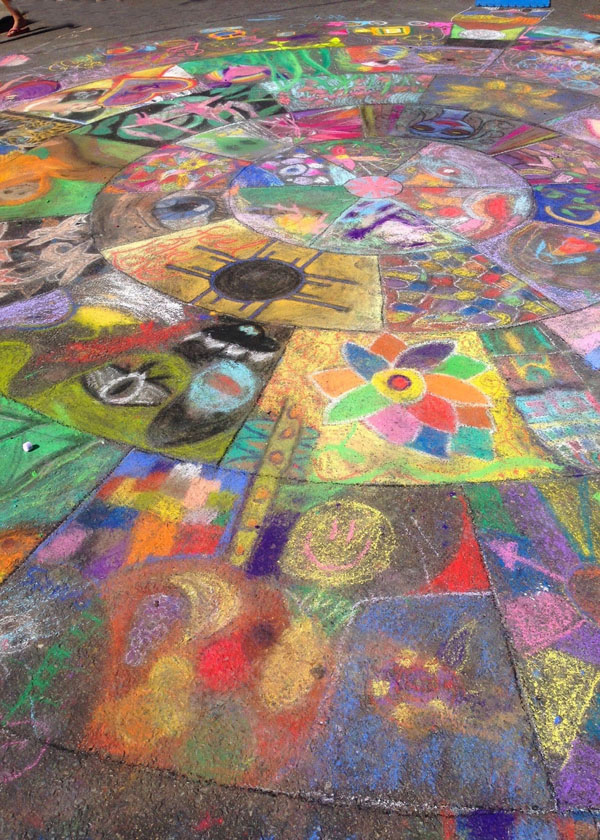 Longtime Venice artist, Gary Palmer, originally from Belfast, Ireland, has made a name for himself in the States and Internationally and is renowned as a street chalk artist. He will be creating one his signature chalk mandalas outside the Electric Lodge Performing Arts Center, with the aid of artist Ava Carpentier Kasrabod. Palmer is one of the early organizers of the Venice ARTBLOCK.

“It’s good to see local Venice artists coming together and doing something for the local art- loving community and in turn to witness the community lending support and appreciation to the event – it’s good for all of us to be reassured the artists of Venice are alive and well and still functioning under the obvious onslaught of rapid and not always progressive change in our community.” http://www.garypalmerart.com

Venice artists often serve to connect us to larger events and world communities. Performance artist, Amy Kaps, recently travelled to Cuba to participated in the International Havana Biennal sponsored by the Arts and Cultural Bridge Foundation. She also performed at the studio gallery of renowned Cuban artist Nelson Dominguez.

“Cuba was a heartwarming experience. The people were lovely. They have a high regard for artists.” Kaps also did a few impromptu performances on the streets of Havana and at historical locations.

See image: by Amy Kaps, Mirrors from her series, Words I want to Hear/Say

Kaps has participated in many of the ARTBLOCK events. “ARTBLOCK is an opportunity for the community to dip into their local culture…an artist run initiative that it is inclusive rather than exclusive,” explained Kaps. The work on view at Kaps’ studio will include photographs (which, in part, are documents of performances), as well as artifacts, costumes and ephemera from performances. Amy Kaps, 1658 Electric Avenue; http://amykaps.com/

Another founding member Francisco Letelier has traveled throughout US, Europe, India, and Latin America sharing his talents across the globe. Known for local murals that integrate community participation, such as his radiant, “Reflecting the Light” murals at the Venice Whole Foods Market, Letelier, travelled to the town of Bi’lin on the West Bank of Palestine last year to create peace murals that transformed the town.

Currently, Letelier is working on the ‘Todas Las Manos’ project in Washington DC in partnership with the Institute for Policy Studies, the Latin American Youth Center and the Chilean Embassy. The project will be created at the Katzen Arts Center at the American University Museum and is slated to be inaugurated in September by Chilean President, Michelle Bachelet, during a state visit.”

“Venice continues to attract talented artists from all over the world. ARTBLOCK creates the dialogues and partnerships that help them support and become part of the world-class local culture of Venice.” Francisco Letelier http://letelierart.blogspot.com/ 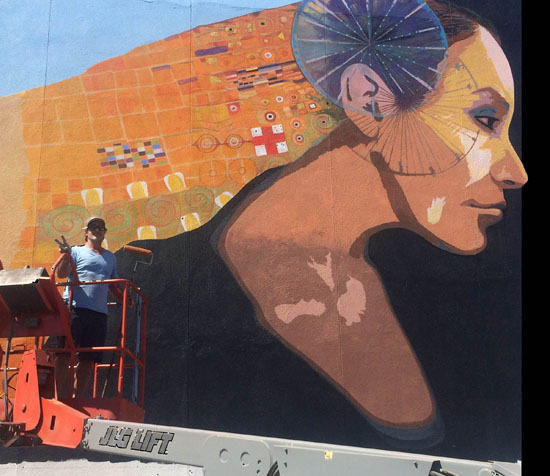 Artist Flavio Bisciotti has just returned from a visit to his homeland of Argentina to re-build his home studio that underwent a devastating fire earlier this year at 709 Woodlawn Ave. During ARTBLOCK, Bisciotti will invite the public to view images and relics from the fire as well as projections and photographs of the event. In the aftermath of the blaze, the site serves as a metaphor for the Phoenix like abilities of Venice artists to rise from fires, hardships and evictions and continue to contribute to vibrant local culture. http://www.fab-gallery.com

If you love art, artists and the spirit of Venice, be sure to stop by the Venice ARTBLOCK Open Studios. Maps can be picked up at various stops on the tour, such as 1003 Art Gallery and Lounge, 1003 Abbott Kinney Blvd, Weir-Quiton Studios at 360 Sunset Ave., Letelier Studio at 6th Avenue and Indiana Court, Social and Public Art Resource Center, SPARC at 685 Venice Blvd., or anywhere else along the route. Just look for the yellow flags. Shuttle buses and pedicabs will be available as well. For additional info, download a route map from the website.