ar, INCOGNITO will gather an eclectic group of individuals, all of whom support the Santa Monica Museum of Art. This tenth anniversary celebration is especially significant as SMMoA prepares for its new role as a cultural beacon on Los Angeles’ new Metro Expo light rail line.

Peter Sellars, who was honored at INCOGNITO 2013, said: “The human scale of the Santa Monica Museum of Art—the fact that the staff and artists behind INCOGNITO make these small acts of beauty for us to experience at an intimate level—that is simply irreplaceable.” In a nod to the redevelopment plan and light rail line, he dubbed the Museum the “Station of Illumination.”

“At the Santa Monica Museum of Art, we believe that art has the power to transform the way we see the world,” says Executive Director Elsa Longhauser. “Free to the public and pivotal to the region’s burgeoning transportation renaissance, SMMoA looks forward to presenting contemporary art and ideas to an expansive and increasingly diverse audience.” 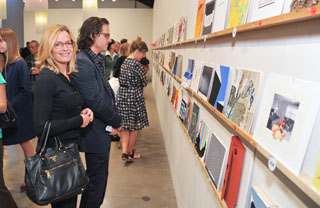 Check out the Video…to get a sense of the spirit of INCOGNITO:

About the Santa Monica Museum of ArtTrust your instincts to select and purchase original
works by a resplendent array of famed and emerging artists. All works are signed on the back; artists’ identities are revealed only after purchase.