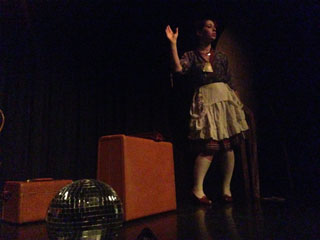 ZAY GEZUNT! at Highways in Santa Monica, organized by Actor, director, producer, Sandy Simona, was touted as “an eclectic evening of New Work from Eastern European and Jewish visual and performance artists.”

In the lobby, before the performance we enjoyed viewing paintings by Zhenya Gershman of her grandmother “Baba” that lovingly depicted the personally individual and archetypical nature of aging.

I and my daughter Anya enthusiastically anticipated a full evening that focused on, celebrated and enriched our own cultural heritage. As it were, we had to wait for the second half of the show for that experience.

The first half of the show featured comedian Jeffrey Scott doing standup shtick called “Fagala” riffing on his self-acknowledged gay Jewish identity with material he occasionally turned to the audience anticipating, if not encouraging, a groan. 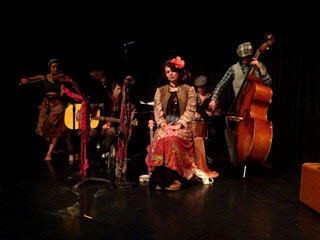 After a brief intermission, the stage was reset for the amazingly powerful “Lost in Lvov” that showcased the deeply personal and emotionally evocative biographical storytelling performance by Sandy Simona. With historic black and white film projections as a backdrop and the Storytelling BAND, featuring Caitlyn Conlin on vocals, acting as a chorus, Ms. Simona’s finely honed script and well-acted performance took us into a dream-like tale of the Belman sisters, who immigrated to America from the U.S.S.R. before Perestroika. Though I must admit to not being able to follow every subtle nuance of language, through her very sensitive characterizations of these relatives in accent, tone and gesture, and, at times herself speaking in present-day reflection, she wove together a tapestry of images and memories in what ended our evening with a heart-felt warmth and satisfaction.