Skip to content
Review: The Bitter Game at the Wallis Center for the Performing Arts

Keith A. Wallace navigated us through a captivating and emotional journey during his one-hour theatrical performance piece, The Bitter Game. Staged on the outdoor Promenade Terrace of the Wallis Center for the Performing Arts, we entered into a neighborhood block party scene with the upbeat sounds from a DJ, the street decorated with chalk writing such as “Peace, Love and Happiness”, and the view of athletic shoes symbolically dangling from telephone wires. 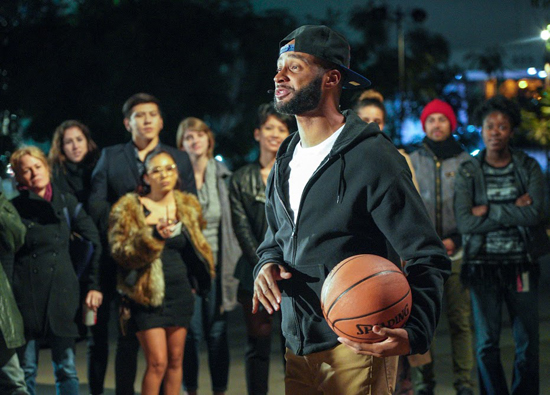 During this preamble to the show, the audience mingled, some engaging with theater personnel as people shot hoops, jumped through double-dutch ropes, sat at tables with dominos and checkers and partook from the barrels filled with soda. Wallace entered the scene and greeted people and offered “free stuff’ from his backpack. The audience was prepared and set-up to feel and behave like a community as we were invited to stand in a semi-circle focused on the charismatic Wallace.

In this solo performance, Wallace embodies a variety of characters who deal with the experience of being Black in America. In the five acts, structured as the four quarters and overtime of a basketball game we are guided through laughter, wisdom, dramatic tension, sorrow, and polemical discourse. 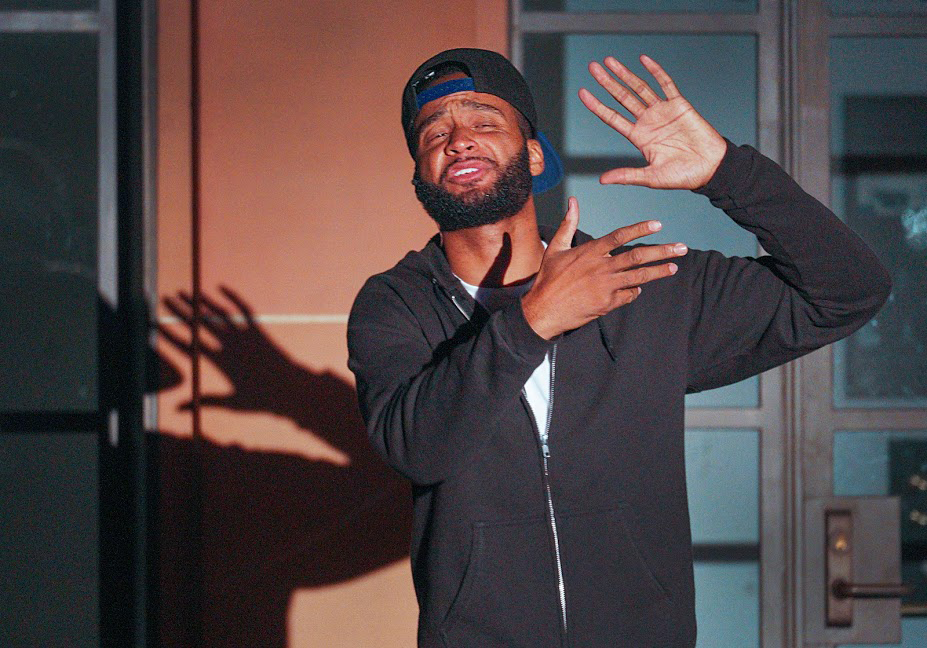 For each act, we were led to different spaces on the terrace and the community atmosphere was reinforced by Wallace throughout as he encouraged us to introduce ourselves to someone we didn’t already know and at “half time” when we formed two “Soul Train” lines where a few selected people got to show off their dance moves.

Based on Wallace’s youth in Philadelphia, the narrative brings to life the story of Jamel Smith who witnesses a neighborhood act of violence as a child, grows in his relationship with his mother, and learns to navigate his interactions with police. Wallace poetically describes the sights, sounds and people in neighborhood and illuminates the “Bitter Game” — the survival lessons taught to the young Black men — “Head up, eyes forward, ego down, keep your hands visible, forget pride, do everything a policeman tells you, don’t ask why, always comply.” 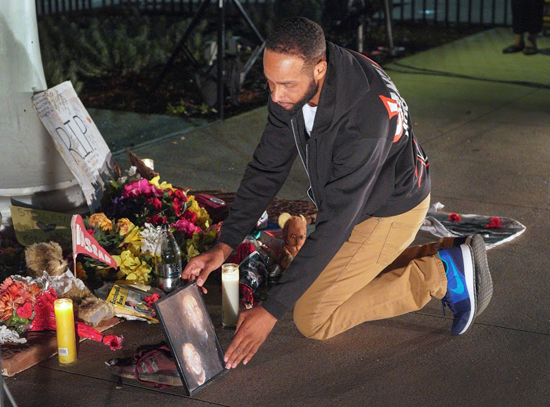 Through the intimacy of one man’s story, Wallace connects us to the very present issue of excessive police force, police murder and police community relations that has affected far too many individuals, families and communities. Hopefully experiencing The Bitter Game will provide we, the audience, the means to further address our sense of community and engage in thoughtful dialogue and concerted action.

The Bitter Game was created, written and performed by Wallace, co-created by Deborah Stein, and directed by Malika Oyetimein. For more info about upcoming performances at the Wallis, visit http://thewallis.org

2020-02-17T18:51:48+00:00By Michael Baroff|Reviews, Theater/Poetry/Books|Comments Off on Review: The Bitter Game at the Wallis Center for the Performing Arts