Skip to content
Theater Review: SOMETHING ROTTEN! at the Ahmanson Theatre

Something Rotten! is anything but. The Ahmanson Theatre’s Los Angeles premiere of the Broadway smash, which is nominated for 10 Tony Awards, including Best Musical, is in fact many things — hilarious, outrageous, superbly clever, dazzling to watch, bitingly satiric, emphatically original, and just generally a rollicking barrel of laughs and a ton of fun. But it is never rotten. A gut-busting send-up of Shakespeare, his plays and all things Shakespearean, it is at the same time an irresistible love letter to the Broadway musical. And sure enough, it ends up as a celebration and a top-notch example of the very thing it sets out to parody. 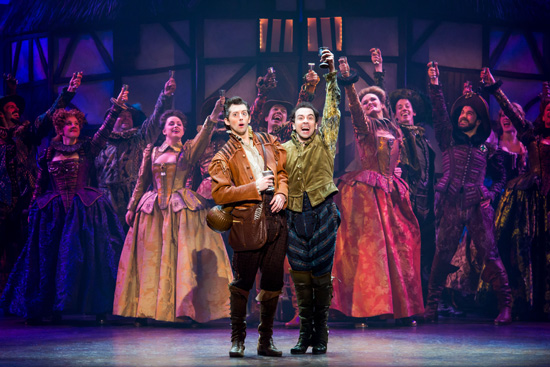 L-R: Rob McClure and Blake Hammond (center) with the cast of Something Rotten! Photo by Jeremy Daniel.

Something Rotten! is a tale of two playwright brothers, Nick and Nigel Bottom, who are stuck in the shadow of that Renaissance “rock star”, Will Shakespeare, and their frustration propels them to set out to write the world’s first musical play, after a soothsayer tells one of them that musicals are the next big thing in theater. Giving away any more than this of the plot would necessitate a spoiler alert, so suffice it to say that the soothsayer assures Nick Bottom that Shakespeare’s next hit play, his greatest of all, will be something called “Omelette.” And the zaniness ensues.

Happily, this touring company arrives in Los Angeles complete with three of the main actors from the Broadway run — playing Shakespeare and both Bottom brothers, but the entire cast, newcomers and all, are perfectly chosen for their roles. Stand-out performers include Rob McClure (Nick Bottom), Adam Pascal (Shakespeare), Blake Hammond (Nostradamus), and Scott Cote (Brother Jeremiah). The songs, including such showstoppers as “Welcome to the Renaissance,” “God, I Hate Shakespeare,” and of course “The Black Death,” are hysterically funny and brilliantly crafted by real-life brothers and long-time songwriters and TV/film veterans Wayne Kirkpatrick and Karey Kirkpatrick. The book is by Karey Kirkpatrick and best-selling author John O’Farrell. The award-winning design team from the Broadway production is all here intact, and the impeccable direction and choreography are by Tony Award winner Casey Nicholaw (The Book of Mormon, Aladdin). 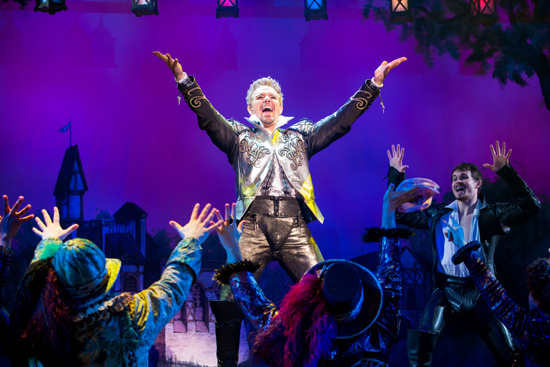 Adam Pascal (Shakespeare), with the cast of Something Rotten! Photo by Jeremy Daniel.

LA Art Party was lucky enough to view Something Rotten! on opening night, and the audience in the packed-to-the-rafters theater hooted and howled with laughter to such a degree that the action of the play was held up after several of the songs due to their enthusiastic applause, and they rewarded the company with a very lengthy and hearty standing ovation at the end.

As the show’s press release notes, Time Out New York called Something Rotten! “the funniest musical comedy in at least 400 years,” and they might not be far from wrong. If you love history, Shakespeare, Broadway musicals, the Renaissance, or just having a good time, hop on the train and head downtown to the Ahmanson Theatre (at the Music Center) and see for yourself. Visit the website for additional info and to purchase tickets. https://www.centertheatregroup.org/