Why do two lonely people, so desperate for a connection, they will do anything to find peace and happiness?  In New York Water, two neurotic New Yorkers meet through a personal ad, and find love in Manhattan. She is a self-absorbed narcissist and in her words, he is a fruitcake! Somehow her overbearing narcissist and his pathetic fruitcake hit it off. But they feel stifled in their native big city and decide to move elsewhere. And so their adventure begins as they travel on an odyssey to Iowa, then California, to explore, experience and try to save their unraveling relationship.

Albert, played by Ross Benjamin who is a ringer for his father, the handsome Richard Benjamin, gives an honest and sincere performance. His character is at times pathetic, and other times gentle, compassionate and hard not to like. And Linda, played by Bridget Flanery is very good as an over-the-top, self-indulgent and animated character who seems possessed by success and climbing the corporate ladder. 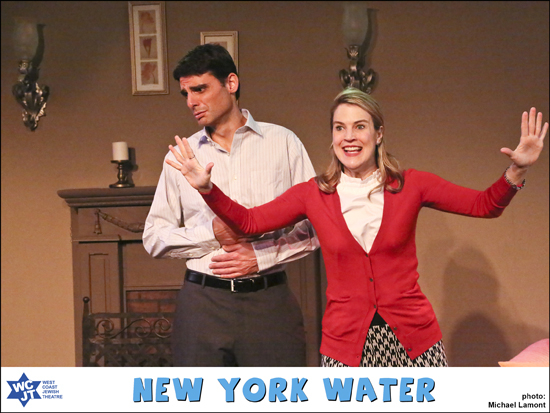 Written by Sam Bobrick, who created the classic TV series Saved by the Bell, has received two Writers Guild Awards (Get Smart, The Andy Griffith Show). His thirty-two plays include: Norman, Is That You?; Murder at the Howard Johnson’s; Hamlet II (Better Than the Original); The Outrageous Adventures of Sheldon; and Mrs. Levine and many more.