Mothers cast long shadows. Especially when they are narcissistic beauty queens. Barra Grant was the only daughter of Bess Myerson the one and only Jewish Miss America – who was crowned in 1945. Barra is an actress and screenwriter who is starring in a one-woman play she wrote about the complex and troubled relationship between her and her famous mother. Miss America’s Ugly Daughter is playing at The Edye Stage at the Broad Theatre in Santa Monica now through August 26. It is an intimate seating theatre, with about 100-150 seats in front of a minimalist stage. A giant, overstuffed throne with gilded golden edges dominates the center of the stage. 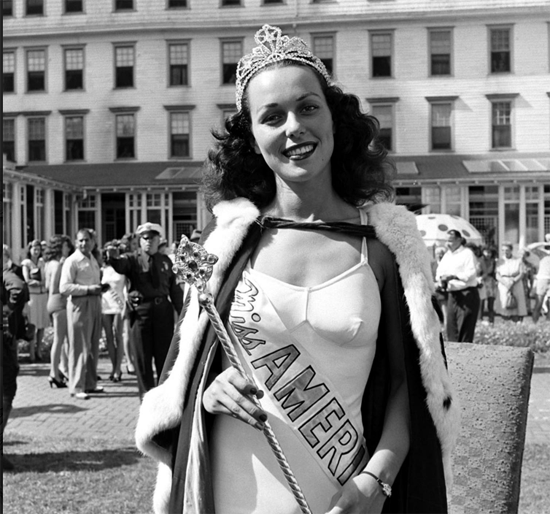 The production opens with images of Bess Myerson’s glorious Miss America crowning flashing and flickering on the stage’s back wall. Her long luxurious curly brown hair peeping from underneath the glittering tiara. Her long legs go on for miles from beneath her one piece bathing suit. The play begins with Barra alone on stage, late at night. The phone rings. She picks it up. Her mother’s voice comes booming over the stage sound system, “I’m going to kill myself!” she declares in big hyperbolic syllables. “Oh, mom!” Barra exclaims in exasperation. A short reply and she hangs up the phone. Then, she begins to weave stories of interactions with her mother, episodes across the decades of their intertwined lives. Always, with wit and morose humor. And, always highlighting her mother’s narcissistic tendencies.

“I like your friends” she says to her daughter in one exchange. “And, it’s such a treat for them to see me.” As each decade passes, images appear on the stage backdrop, a famous song from that era plays – you gain a sense of movement of time. You also hear the disembodied voice of the mother booming above the stage, every time she calls. In a single night of phone calls she interrupts the daughter all night long as we (the audience) span an entire 60 years of decades with Barra as she recounts her life with her mother. Her mother bemoans the loss of her beauty. The ruined romances littering her past. The doorman who is her only friend. And, she demands her daughter’s attention and forced sympathy.

It is an interesting and thought-provoking story of a daughter growing up in the shadow of her famous mother – what it did to her life, how her life was often held hostage to her mother’s making. The long hours with the therapist, the failed romantic relationships, the depressed child who was dominated by the mother who treated her daughter as an extension of her own self. Her mother is neurotic, self-absorbed, mean-spirited, critical, and very emotionally demanding. 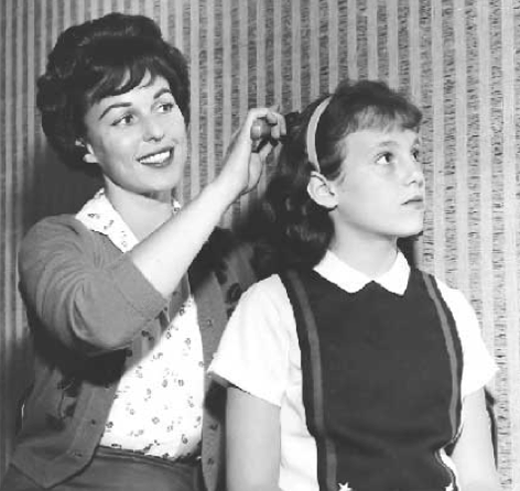 The daughter is acquiescent, uses dark humor as a defense mechanism, and tries to find her own life as she gets older. But, always the presence of the mother looms large. Just like the large and overbearing thrown that dominates the center of the stage. The mother is always there – but also always absent. The mother’s absence is a long running theme throughout the play. This is expressed in the fact that we never even see the mother in the flesh. She is just a disembodied voice blaring from the loud speakers. She is the space left in that ugly purple plush thrown in the center of the stage – a glittering tiara displayed on the little table next to it. Imposing, impersonal, and empty.

The daughter’s indomitable spirit comes through in their exchanges – where she fights back with biting wit and sarcasm. You tend to cheer her on. You tend to laugh at the jokes, even as you cringe at the mother’s vicious criticisms. When Barra recounts the story of telling her mother she was marrying a non-Jewish man, her mother says “I’m happy for you. I am just disappointed for myself.” You can feel the thickness of the co-dependency between them. You sometimes catch a glimpse of your own mother – your own self in the fight to claim your separate life. You pity Barra for the constant barrage of her mother’s judgments. Barra recounts how she finally found the love she so long desired from her mother – the unconditional love she found in her husband’s gaze. The unconditional love she felt when her own child was born. Now, she had a daughter of her own.

The play explores the complex nature of how obsessed her mother was with her own beauty and how this obsession engulfed her daughter. How she used her daughter as stage props for publicity stunts. How her daughter’s frizzy and messy hair was always a constant problem. Her pudgy frame and not so pretty face a poor reflection of the mother’s beauty. The play’s subtitle, Beauty is a Bitch, perfectly captures this dynamic. Barra’s mother was a the victim of her own beauty and this created a monster as she become a slave to the lure of the promise of fame and adoration – but in the process she became a bitch, fixated on her looks and expecting everyone around her to mirror beauty back to her. Barra very clearly signals that her mother was a bitch. This play is her attempt to reconcile this fact, to explore the complex dynamics of the relationship they had, and to ultimately find forgiveness. 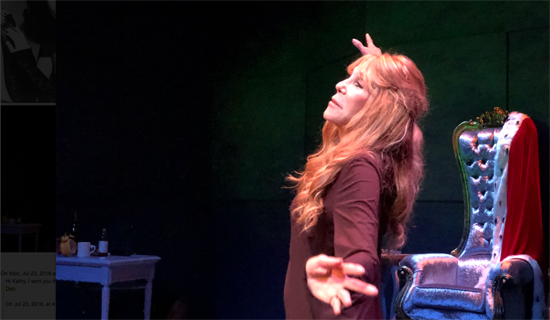 At the end of the play, she spends time with her mother as she lays dying. Still, she is a disembodied voice emitting from the sound system. She learns the biting words of her mother’s own mother when talking about the death of a younger brother from diphtheria “I wish it had been you who had died.” Only at the end of the play do we begin to understand the inner dynamics at play inside the mind of Barra’s mother. We begin to learn what sculpted and wounded her – an equally critical and severely Jewish mother.

In the end, Barra sits on the ridiculously overgrown thrown in the center of the stage. She twirls her mother’s tiara idly in her hands. She speaks of compassion and forgiveness. She vows to break the chain of family legacy – her own daughter will never feel such pain.

For additional info about the play, visit the Event Feature on the Upcoming Events Page or see the website https://www.missamericasuglydaughter.com/