The Morgan-Wixson Theatre was transformed into turn of the century streets of London in their wonderful production of the timeless classic, Mary Poppins. The performances were wonderful. The acting, the dancing, the singing, set design, costumes, lighting and direction by Kristie Mattsson, all worked seamlessly to create a spectacular evening!

Amanda Greig, in the title role was charming and enchanting. Her singing was fantastic and her comedic timing, impeccable. Kudos to the entire cast with shout out performances to Sadie Fisher and Ethan Kuwata who played Jane and Michael Banks respectively; particularly Ethan Kuwata whose facial expressions, singing, dancing and energy level were off the charts. And Philip McBride as Bert gave a high energy, heartfelt and exciting performance. Spencer Johnson and Eileen O’Donnell as George and Winifred Banks also were excellent.

My eight-year-old companion and I really enjoyed everything – our favorite scene was the Chimney Sweeps in Step in Time – the whole theater was filled with amazing energy and foot stomping choreography that was completely in sync.

Every scene change easily flowed. In just a few seconds, we were transported from the streets of London to the interior of the Banks house. Then, furniture moved and we were on the rooftops of London! Again kudos to the entire production team. The whole show felt effortless and magical. Also, we really enjoyed the use of puppetry throughout the entire play – it was very cleverly done and well executed with the puppeteers happily dancing alongside the puppets. In particular, the Let’s Go Fly a Kite scene was fun and uplifting! Also very notable was Feed the Birds; it was so convincing that we forgot we were looking at puppets. 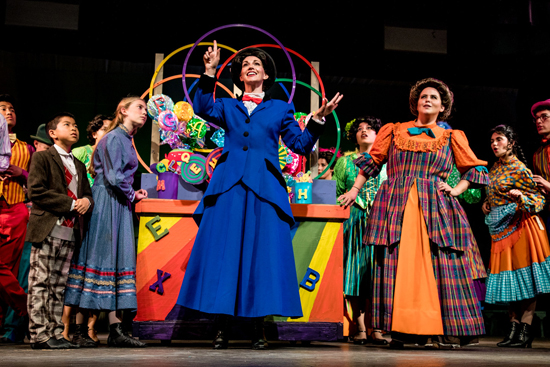 I also loved how the actors at certain parts of the performance came down the aisles, especially the scene of lanterns towards the end of the play which lit up the whole theater and made the audience part of the entire experience! There’s still time to see Mary Poppins now through August 4th – a must see for kids and grownups alike!!

Mary Poppins will run through August 4th at the Morgan-Wixson Theatre, 2627 Pico Boulevard, Santa Monica 90405. Tickets range from $23-28 per person. Visit the Event Feature, or see the website to find out more about the show. Free parking available at the Venice Family Clinic, 2509 Pico Blvd. http://www.morgan-wixson.org