Skip to content
Review: Love Actually Live at the Wallis

Love Actually is a classic holiday movie. In case you have been living under a rock, the 2003 cult classic has made a huge impact on its devoted fans and I admit to being one. My roommates and I would have viewing parties to kick off the holidays. 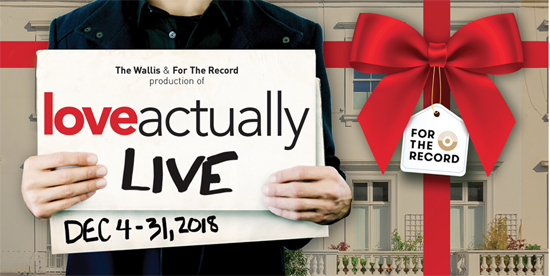 So when I heard that For the Record and the Wallis Annenberg Center for the Performing Arts would be presenting a live version, I was intrigued. Unaware as to how a live version would work, I was concerned that it may taint my perception of the movie and all its nostalgia.

I was pleasantly surprised when musicians came through the audience, out of side entries of the theater…keeping in theme with the wedding scene from the movie.

The sets (by Matthew Steinbrenner) were fantastic and I loved how the musicians were interspersed within the set and the pit. Led by conductor and musical arranger/supervisor Jesse Vargas, the fifteen-piece orchestra was right on cue.

Several band members also doubled as characters from the movie. The film screened above the entire set as well as on two sliding doors within the set. Actors were inhabiting the characters, recreating the exact scenes from the film while the movie was being screened above them. They actually never spoke, but broke out in song, singing that undeniably well-known soundtrack. It was a feast for the eyes, in addition to the ears…there was so much going on all over the set (above it as the film screened) and within the audience. On several occasions, actors stood in the midst of the audience and belted out a tune, while another actor stood on stage and blended in a perfect harmony.

The production was directed by Anderson Davis, (the artistic director of For the Record), and he did a fantastic job. The casting was phenomenal as well. The vocal talent was stupendous. Carrie Manolakos who played Natalie (the Prime Minister/Hugh Grant character) blew me away with her voice. Other stand out performances came from Tony award winner Steve Kazee, Rex Smith, Rumer Willis, B. Slade, Kelley Jakle, and Justin Sargent. 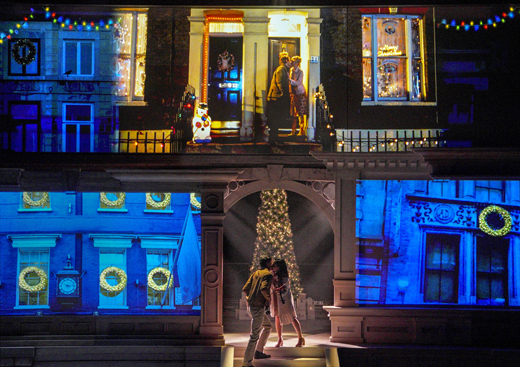 The audience was on board from the start of the show and yelped every time the cast would introduce a new song. “All you need is Love,” “Puppy Love,” were all well received and the highlight was the Pointer Sisters’ hit “Jump” which would be reprised in the latter half of the show. Joni Mitchell’s treasure of a song, “Both Sides Now,” held even more power than the movie, and brought us all to tears as four characters joined in.

If you are a fan of Love Actually, you will not want to miss this. There is still time to enjoy this very original multimedia production. Love Actually Live runs through December 31, 2018. Check the Event Feature for performance dates and times and find out how to purchase tickets. Or check the website (below). The show was chosen as a Top Ten event for December on LAArtParty.com