LA Opera’s spectacular production of Philip Glass’ Satyagraha, the story of Gandhi’s life in South Africa between 1893 to 1914, is sung in Sanskrit and is not intended to be literally understood word-for word, rather to be viscerally experienced through the emotional performances of the cast, the artistic visual power and complexity of the staging, and in the subtle variations in the haunting and meditative musical score. 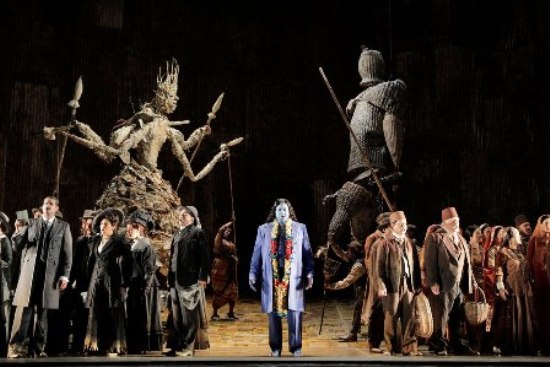 The title translates “Truth Force”, which was the core of Gandhi’s philosophy of “dignity to humans” and commitment to political struggle through “love” and “non violence”. The text of the opera is drawn from the epic Bhagavad Gita dialogue between Arjuna and Krishna about the moral dilemma and despair of the violence and death in battle.

The three Acts of the opera transcend story-telling in chronological time and rather present a metaphoric sense of past, present and future. Each Act presents scenes evoking pivotal historic events in Gandhi’s life, struggles, and philosophical development and are symbolized by the guardian spirits of Leo Tolstoy, a proponent of non-violence, Rabindranath Tagore, influencing a sense of self-reliance, and Martin Luther King, Jr., who took inspiration from Gandhi. For each respective Act, we see a guardian positioned silently above the stage holding forth as the action below unfolds in scenes that energetically transition from depicting external events to evoking human internal changes and culminate with a sense of resolution to the presented struggle. Ultimately, as we feel the challenges Gandhi faced in his life, we sit with what is happening in the world and question whether we, as Gandhi lived, can learn to hold respect for our opponent and not embody conflict. 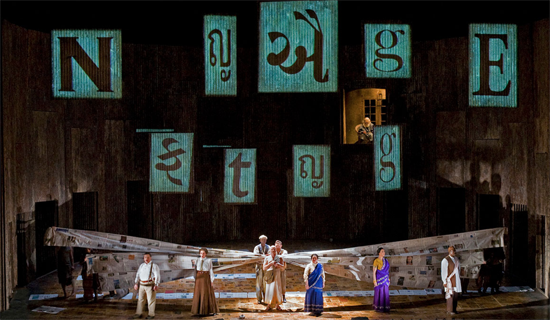 For a 3-minute video taste of the production, go to YouTube. Satyagraha continues at the Music Center through November 11, 2018. Arrive early to hear a pre-performance talk by Duff Murphy, host of The Opera Show on Classical KUSC. https://www.laopera.org/